Debauchery Trumps Emotion in La traviata at the London Coliseum 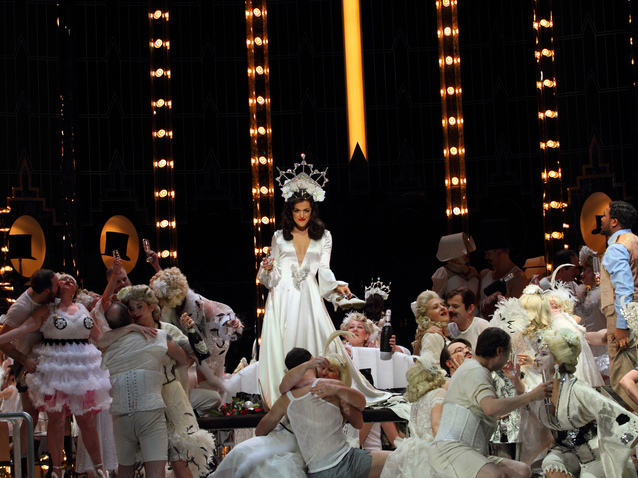 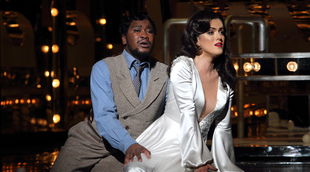 Daniel Kramer’s production for English National Opera, where he is the artistic director, started life in Basel last year and now comes to the London Coliseum for the first time. It is promoted as contrasting ‘spectacular party scenes with tender intimate moments’, but in the process Kramer pushes almost every idea that he explores to breaking point. His philosophy seems to be that if the Act I party is ultimately about hedonism, and if Violetta’s lifestyle epitomises this, then the associated points can have more impact by being pushed to extremes.

To this end, the opera is set in a fairly non-specific time that, although seemingly reminiscent of the 1930s as it boasts an Art Deco inspired set, is primarily focused on playing up the debauchery by presenting an array of suspendered and tasselled characters. The problem arises in correspondingly pushing Violetta to extremes. She may be a courtesan, a social butterfly, and have a repetition for being the life and soul of the party, but she is also a sensitive and complex individual. To portray her as a total pisshead, which is what she seems to be in Act I, destroys the essence of the character, and makes us feel nothing for her because our emotional response needs to flow from feeling her essence. For her to respond to hearing Alfredo utter her own words back to her by swigging from a bottle, and then to end Act I by crudely smearing lipstick on her face, is little short of crass. 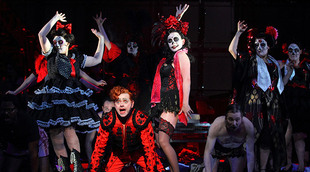 The production seems intent on injecting a flurry of activity into everything when so often all that is required is for the soloists to think, and hence naturally feel, the requisite emotions. For example, there is some game playing involved as Violetta initially rejects Alfredo, but when the subtexts are easy enough to read anyway, to bring them out through hyperbolic gestures destroys everything. The fault does not rest with Claudia Boyle as Violetta, who may not be a natural Verdian but produces a sweet and clear sound, but with the direction to which she is merely responding. Nevertheless, things are not helped by there being a mismatch between her and Lukhanyo Moyake who does not enter the part of Alfredo quite so thoroughly, and whose vocal output on occasions feels weak. When he does get on top of his arias he reveals an extremely pleasing voice, but still his tenor seems just a little too heavy for Alfredo.

If Act I gets the evening off to a bad start, things take a long time to recover. Alan Opie is certainly the best of the principals, even if his baritone is not as strong in the lower register as would be ideal for Giorgio Germont. However, Alfredo’s father is a complex character who is undoubtedly expectant, but also quite sensitive and (he believes) straitjacketed by society to behave as he does. This Germont seems only to care about getting what we wants until fairly late in his encounter with Violetta. When he does start to bleed inside, Violetta is too busy gathering flowers to look him in the eye and hence make us feel any connection between the two. In his subsequent encounter with Alfredo there is little sense of the guilt and hypocrisy he feels in comforting his son while being the cause of his grief. 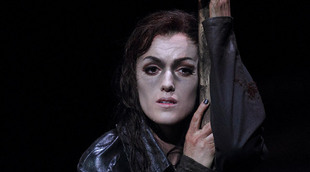 Flora’s party in Act II’s second scene has its strong and weak moments. The gypsy and matador songs are not helped by the fact that they are carried off entirely by the chorus with no aid from trained dancers. Normally, it is a positive to use the chorus to full effect, but because they are asked to indulge in some sexy, but ultimately lame, movements, both dances feel underwhelming. Similarly, because money from the gambling table has been thrown around throughout the scene, the moment in which Alfredo insults Violetta by hurling his winnings at her to supposedly pay off his debt has virtually no impact.

Nevertheless, the scene does succeed in delineating the different characters and their viewpoints, which is not easy, and as a result has a reasonably moving ending. Act III is the most successful of all as Claudia Boyle sings ‘Addio, del passato’ well, and overall we feel quite an emotional impact. Nevertheless, the scene is still marred by watching Violetta quite literally digging her own grave, when the act of hitting us around the head with such a metaphor undermines the quiet dignity that Violetta should show, and which makes us feel so much for her.

Conductor Leo McFall delineates the various lines well and elicits a fairly beautiful sound. However, there are times when a greater level of sumptuousness is required to build up the intensity and frequent sense of foreboding. Nevertheless, the orchestral output is one of the evening’s positives, and if it does not always move us entirely, this is more a result of what is happening on the stage than in the pit.