Otello at the Teatro alla Scala 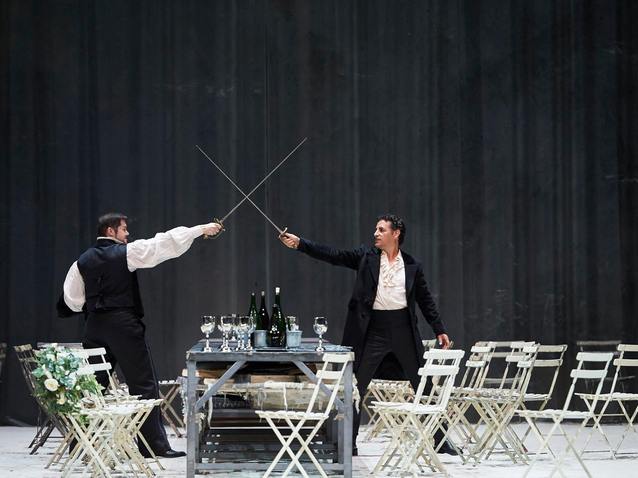 With the exception of a single charity performance for the victims of the Franco-Prussian War back in 1870, Rossini’s Otello had been missing from La Scala for over 150 years, since January 1863, when the composer was still alive: an astonishing record for Rossini’s historically most popular opera seria, along with Semiramide. Its comeback was meant to be quite an event – and it actually turned out to be one. The opera house had summoned a remarkable set of singers: no less than what was required for an opera conceived from the start for an all-star cast. Otello can boast a most outstanding feature: three tenors in top roles, completely excluding the traditional alto which was still fashionable in the 1810s (as Rossini’s Tancredi had clearly proven a few years earlier). This revolutionary change took place in Naples, where the opera was premièred in 1816 under Napoleon, under the influence of the characteristically French haute-contre. Anticipating the Carreras-Domingo-Pavarotti exploits, the three tenors in Rossini’s Otello (the title role and his two rivals, Rodrigo and Jago) are constantly busy in vocally challenging each other, as well as the soprano primadonna (Desdemona) and the bass (Desdemona’s father, Elmiro). 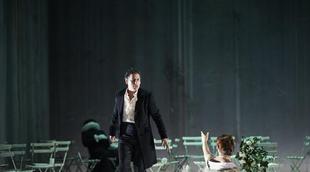 The atmosphere of a vocal tournament which pervades most of the score was rewardingly conveyed by La Scala’s excellent performers. Gregory Kunde lends Otello a quite unusual dark voice, perfectly in tune, specially at ease in the top register, sporting flawless coloratura and convincing diction. Juan Diego Flórez’s interpretation of Rodrigo couldn’t sound more contrasting, in its very welcome variety in vocal colour and dramatic characterization: a much lighter, brighter tone, technical perfection, apparently effortless, especially in the slower sections: in a word, Rossini’s writing for tenor performed at its top. Rodrigo’s Aria from Act 2 « Ah! Come mai non senti » was listened in religious silence and wildly applauded by the local audience, who knows Flórez very well, as if it were more of a recital number than the kickoff of an opera act. Edgardo Rocha’s Jago offered a similar contrast to Otello’s colour: a beautiful, pleasant, ringing voice, quite appropriate to a role the same singer had already performed in the Zurich production recorded by Decca. The confrontation between the two characters peaks in the Duet from Act 2 – rightly appreciated by the audience – and is renewed as Rodrigo and Otello face one another in the initial section of the ensuing Trio. On the other hand, the proximity of Jago’s and Rodrigo’s colours offers more than a shiver in their Act 1 Duet, when they sometimes sound as different declinations of a single voice: quite an acoustic illusion. Olga Peretyatko appropriately balanced the gentlemen’s show off of belcanto as the only main female character in the cast. Her Desdemona is endowed with a warm voice, remaining just as beautiful across its whole range, accurate in administering voice volume, excellent in coloratura and change of register, especially remarkable in the Act 2 Trio and Finale and in the final Duet from Act 3. Roberto Tagliavini’s Elmiro deserves to be mentioned for his round, full bass voice which provided the appropriate weight to Desdemona’s father blind authority, expressing the more traditional side of this complex double-plot opera. Substituting for Sir John Eliot Gardiner’s originally planned musical direction, Chinese conductor Muhai Tang, whose experience includes the above-mentioned Zurich/Decca production, offered a predictably sparkling, albeit not flawless, interpretation: synchronization between pit and stage was not always perfect in the Act 1 Finale, and, most regrettably the scene anticipating the Otello-Jago Duet from Act 2 dragged on endlessly, something which should not happen in an opera which has acting as one of its core features. 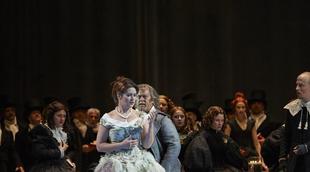 The direction was entrusted to Jürgen Flimm, current director of the Berlin Staatsoper, assisted by Gudurn Hartmann, and taking inspiration from a conception by Anselm Kiefer for the sets. Flimm’s show is anchored on two central ideas, appropriately emanating from Rossini’s masterpiece (libretto by Francesco Berio di Salsa). First, we have the feeling the director tries to correct the “mistake” in the title of the opera, which should in fact be called Desdemona, as Fedele D’Amico appropriately observed decades ago. While the overture is still in progress, Ms. Peretyatko enters the stage simply positioning a flower wreath, balancing in a way the opera’s long initial section devoted to male society and its rituals. Desdemona’s key role will be further enhanced in Act 3, as we will see. The other sensible premise was to treat Act 1 and 2 as a whole, separating them drastically from Act 3, which is considerably different from all respects. Set and costumes barely change in Act 1 and 2: evocative, very tall, bare walls offer a kind of neutral frame for the action and the vocal tournament: a choice which works quite well. A good idea is certainly also Jago’s physical aggression of Desdemona as they first meet: this shouldn’t actually happen at that moment according to the libretto, but this short, silent and violent scene very blatantly demonstrates Jago’s rejected-lover’s hate of Desdemona. Quite original and interesting are also the tender attitude Desdemona and Rodrigo share at the outset of Act 2, and Desdemona’s being left on the ground as garbage (she looks like an indistinct ball of feathers) at the end of the Trio. It is difficult to judge the consistency and overall meaning of this first part of the production: characters and choir are dressed in (early to mid-) 19th-century (Rossini’s time?) and 17th-century (Shakespeare’s time?) costumes, while Otello stands out with a military coat and a shirt open casually on his dark breast; they act in a space serving originally for a Senate meeting and later for an explicit wedding celebration, with Elmiro clad in priest-like garments; quite often the characters overturn folding chairs in their anger or throw flowers on the ground; there appear to be a few quotations from Jean-Pierre Ponnelle’s Cenerentola (the choir and its top hats in the first scene of the opera, the rose gag in the same scene) and from the recent Otello directed by Moshe Leiser and Patrice Caurier for Zurich (the decrepit and faltering Duke of Venice). What however is to be regretted about Act 1 and 2 are the moments when the action onstage distracts dramatically from the real and only “action”, i.e. the magical moment of belcanto offered by the singers. It happens twice: in the Rodrigo-Jago Duet from Act 1, whose final cabaletta, the peak of a memorable musical process, gets ruined by a couple of girls who start flirting with the tenors and a group of notables clearing the table. A director might probably have a bit more courage to leave these moments alone, to let the audience concentrate on the pure musical aspect, which is after all the raison d’être of such situations. Something similar happens during the Otello-Jago Duet in Act 2, when the aforementioned notables start tidying up the room, while the two girls from Act 1 disinfest it with insecticide tanks. 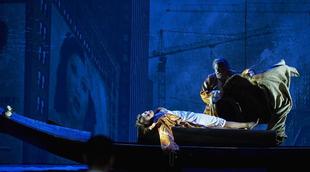 Something quite different confronted the audience at La Scala in Act 3: a highly dramatic, romantic, and by 1816 very progressive theatre piece which inspired Flimm a convincing main idea. Once more, he lifted it appropriately from the work itself: Desdemona hears from the window of her bedroom the song of a gondolier quoting Dante’s Inferno. In Flimm’s view, the gondola directly enters the bedroom and remains there, after the departure of the gondolier and his eight mates who led the boat in, to serve at once as Desdemona’s bed and coffin, hauntingly and effectively going back to the Lugubre gondola tradition. This very powerful, dominating symbolic presence is further enhanced by Desdemona transforming progressively in a typically Romantic icon – not far from the portrait of Isabella Colbran, Rossini’s first Desdemona, towering in Museo Teatrale alla Scala – as she sings in a magnetic diva attitude her monumental Willow Song «Assisa a’ piè d’un salice», and the harp – beautifully played and it had happened with the horn introducing Desdemona’s first appearance in Act 1 – crosses the entire stage, also as if it sailing on a gondola. 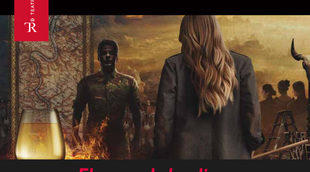