Das Liebesverbot at Madrid: the ‘other’ Wagner A  little known Wagner, and with a dubious reputation, basically because of its exclusion from the true ‘corpus’ at Bayreuth, wherefrom it was banned together with Die Feen and Rienzi by composer and family. It’s strange that in the most sacred place of Wagnerism it’s impossible to see an opera that, following a wonderful work by Shakespeare much more ambiguous, complex and finally interesting than the libretto written by the author, the typical ‘opera buffa’, Das Liebesverbot, tells us about the ultimate stupidity of all  interdictions (in the particular case, that of loving). 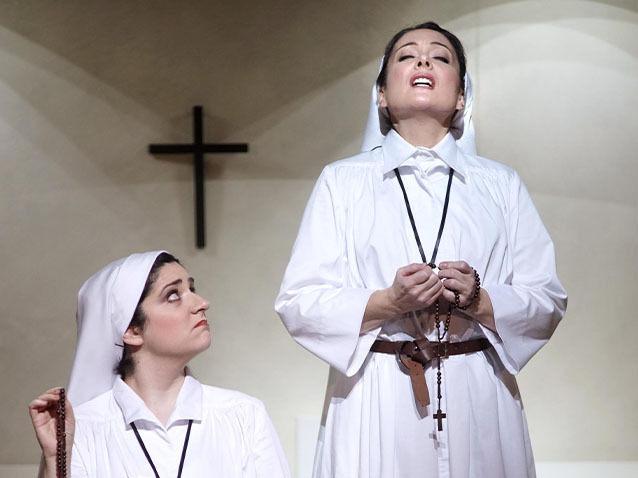 It would be a waste of time trying to find here the ‘beginnings’ of the  loved and revered Master since he was still searching his own style after the efforts –following Weber and the German romantic opera- of his first title. Now he was turning his attention towards the Italian (particularly Donizetti) and French operatic world, but there are also souvenirs of Mozart’s Singspiel (there is a moment when one expects to hear next the Papagena-Papageno duet from Die Zauberflöte). And of course it was compulsory for him to have in mind the abilities of the company at Magdeburg’s Theatre, where he was engaged as musical director and where the first performance was played (a fiasco with that single night ; the second was interrupted due to a quarrel between artists for sentimental reasons) and last but not least the preferences of the public. In spite of all this, being well aware of a style and a kind of music doesn’t mean feeling it as your own, as a natural, and this is the case. Furthermore one ist almost constantly reminded that conciseness never was one of great Richard’s virtues. Even with important cuts we have had two hours and a half of music, pleasant of course but a bit reiterative, and, worst of all, not always matched to situation and/or characters. The truth is that today we wouldn’t make a particular effort (as it happens, as a matter of fact, with a great number of operas completely forgotten not without a reason, some of which fleetingly reappear in a desperate hunt for ‘rarities’) were it not the name of the author. But Wagner begins also, now and then, ‘being Wagner’ and so we are treated in less than two minutes to some top notes (‘Rache!’) written for a Brunhilde in Götterdämmerung just in the middle of a belcanto score (more than probably before or after a ‘messa di voce’ particularly difficult or fioriture ‘Norina style’, just to focus for a moment only on the primadonna role –this opera has also a ‘seconda donna’, a soubrette, two first tenors, a baritone, a bass, not to mention the minor roles, and none of them, apart from the last ones, has an easy task...The Magdeburg company must have been quite something). We hear the prelude of Lohengrin ‘s first act (introduction to the second scene of the first act), or phrases which vaguely remind us of The flying Dutchman (the duet Isabella (protagonist)- Friedrich (her antagonist, first act) and also in his big air at the second act, an early example of negative characters in Wagner. As the composer, by changing the action to Palermo with a German governor, probably wanted to confront the world of discipline and rigour –actually  fake- of Northern Europe and that of pleasure, vice and corruption ‘typical’ of the Southern part (and together with love also Carnival is banned), director Kasper Holten (this one is a coproduction between Madrid, London and Buenos Aires) has taken advantage of this idea to remind us of the present situation of Europe: at the (happy)end the absent King of Sicily arrives on an airplane in the person of Madame Merkel, who joyfully makes acquaintance with her people, generously distributing an enormous quantity of bank notes. So we can say that sometimes if not always ‘modernization’ in opera production has its reasons, and also video, mobile phones prominently present, beautiful costumes and very simple and functional scenes help to liven the story. If we add furthermore the memories of American musical (the yellow moon at the last act) or of the once famous productions by Walter Felsenstein at the Komische Oper of Berlin (the ‘tempest’ scene with the umbrellas), we have a full use of every possible resource to amuse the public and at the same time to serve this title (sometimes with a heavy hand on the caricature) and the only problem is that, more often than not, you don’t know what to whatch or where, as the principal action gets combined with others in parallel, funny of course, but not always necessary or well matched (convent scène, where the nuns and their activities remind a bit of their likes in Almodóvar’s film Dark Habits ).

Speaking of the music, Ivor Bolton’s reading was good, but not great, far more interesting in the lyrical moments (not many) of the score and rather monotone –nearly always ‘forte’- for the others (The overture was, of course, the highest and most brilliant moment, but even so there were little subtleties and nuances, those that , on the contrary, the spectator could find at a young Wagner’s portrait on the curtain, where the Master’s mouth, eyebrows and eyes gestured in an ironic and funny way full of mischief and complicity. The orchestra played masterfully: no technical problems were to be found. Excellent also the chorus (directed by Andrés Máspero), also capable of some fine dramatic moments (a pity that the German text was quite difficult to understand). 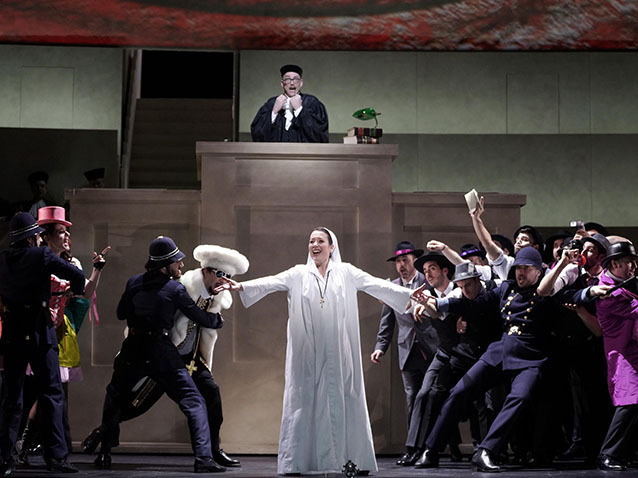 A good cast was leaded by two outstanding artists: Manuela Uhl, nothing short of perfect in the vocally difficult role of Isabella, giving also a most welcome ironic interpretation; even better was Christopher Maltmann’s exploit, an unforgettable performance madly applauded, which succeeded in the impossible task of making believable and sympathetic(!) that terrible Friedrich, both excellent singers (Maltmann’s air –very very long- was a show stopper, with his teddy bear against his chest, mum’s portrait over the bed and the glass of old good Bavarian beer on the fridge). Very good also Ante Jerkunica, for once not a bad guy, in the comic role of Brighella, María Miró (Marianna, ‘seconda donna’ gratified with the prettiest fragments of the score, capable of beautiful pianissimi and some good, though a bit acid, top notes), and María Hinojosa (a buoyant Dorella). The less difficult roles were aptly cast (David Alegret, David Jerusalem, Isaac Galán , but perhaps it’s only fair to mention in some detail the amusing Ponzio Pilato –what a name for a comic character- portrayed by Francisco Vas). The two leading tenors were Peter Lodahl (Luzio with a small voice, well trained, and a magnificent actor) and Ilker Arcayürek (his Claudio was the weakest point of the whole cast: voice even smaller, restrained in the high register, he went through a terrible ordeal during the ‘prison duet’ with Isabella).

In the second and very correct cast, Leigh Melrose portrayed Friedrich in a preposterous way, his timbre a bit light for the part, while Sonja Gornik (Isabella) displayed a ‘spinto’ voice that had some problems in coping with the quieter moments and the belcanto aspect of her role; as an actress she was very intense but always at the first degree, showing no distance at all. The tenors had this time large and full-bodied voices, alas, not of the kind required for these roles: Mikheil Sheshaberidze (Claudio) has no doubt a pretty colour and big volume, the trouble being that he never seemed to know what to do with it but showing off (well, it’s neither the first nor the better known example of tenors from that part of the world singing and acting this way). Peter Bronder, as everybody should recall, is a great Mime, but the voice is, to put it mildly, not beautiful and the large vibrato in the high and central register are not the best assets to convey a good Luzio. On the other hand, Martin Winkler was a wonderful Brighella, delivering his big scene in the first act with such a verve that deserved the thunderous applause that welcomed it. 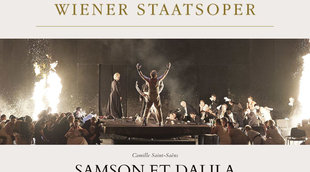 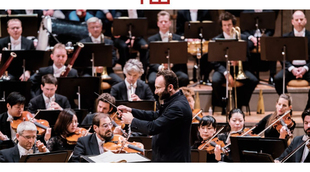