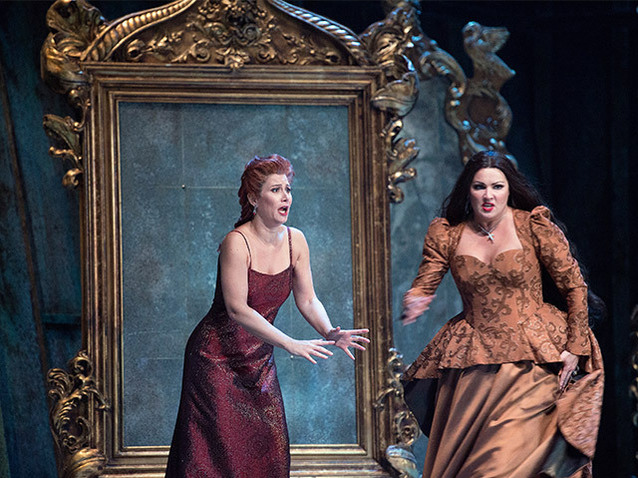 You could see a lot of people asking for a ticket in front of the theatre, something quite impossible when one of the singers is Anna Netrebko (at the same time there were young people delivering pamphlets against the diva because her support to M. Putin in the case Ukraine).
But it’s impossible to perform a difficult opera as this of Donizetti it only with a big name. The cast was a fine one, and for the ladies the choices were absolutely right (apart the fact that scissors are still being used too much – it’s true that the score is long, but you can say almost without the shade of a doubt that after sixty years back in the repertoire nobody would dare to do so were the composer other than the Bergamask).

Judit Schmid did very well with what was left to sing for poorde Smeton, the page. For some in the public a delightful surprise came from Veronica Simeoni’s magnificent performance of Giovanna Seymour : she was no less than superb (the recitatives were masterly) particularly in the two big duets (with the King and Boleyn) and of course in the great air and cabaletta  in her last scene (‘Per questa fiamma indomita’), in spite of a costume and a wig much more appropriate for the courtesan Giulietta in Les Contes d’Hoffmann.

It was clear that Netrebko has arrived now at the peak of her career: I’ve never seen or heard a Boleyn sung with a so beautiful, luxurious, firm voice, so equal in and between all the registers, fearless in the high notes (she added one at the very end of that marvelous melody which is her last air, ‘Al dolce guidami castel natio’, which perhaps wasn’t very tasteful but the public went mad), with glorious pianissimi (without lingering for hours in them) acting with real passion, which makes her rendition of the part even superior, if that is possible, to her two former incarnations of the role at Vienna and the Met.

The gentlemen didn’t attain the same degree of perfection. Luca Pisaroni is an excellent singer and actor but his voice sounded too light without powerful low notes and his modern suits made him more a capricious tycoon (Mafia type in some moments) than a Tudor king.

Ismael Jordi has a beautiful voice and he signs very well, but I find he’s more comfortable in other parts (even in Donizetti ones – I remember with great pleasure his performances of Lucrezia Borgia, Le Duc d’Albe and Linda de Chamounix). Percy seems too much hard  a role for him (his best moments were the duet with Anna and the trio with her and the King, which happened to be also the very best of  Pisaroni).

A real surprise was the bass Ruben Drole (Rochefort, Boleyn’s brother), with a great material (particularly in the low register); tenor Yujoong Kim sang efficiently the phrases of perfidious Hervey.

The choir (instructed by Jürg Hämmerli) and the orchestra of the Opernhaus were at high level while Andriy Yurkevych was very alert not only in conducting but also in coordinating the whole performance (this second aspect is not always sufficiently appreciated as it should in a conductor) without never forgetting or letting loose the stage.

Giancarlo del Monaco’s production was not one of his best. Not only it was a bad idea to forget the time of the facts (this is history after all); he insisted in having on stage throughout the opera  the  future Queen Elizabeth I (in the overture she still plays with her doll) with irritating effect : Zoe Lagutaine obviously followed del Monaco’s ideas, but she was notoriously older than Elizabeth at that time, furthermore she was there every time the adulterous couple was supposed to  meet secretly so that during Seymour’s air she finally took off the head of the doll (apparently a family mark). Even in the last scene was she involved cutting her mother’s hair after what she evaporated. The choir  sang nearly always at the sides of the stage, as the public in a theatre box (in the 19th. century). In the first act the need of a swift transition between scenes resulted in Anna’s private rooms located in the open air, with a great tree in the middle of it (and poor Smeton trying vainly to hide). In the last scene Smeton, Percy and Rochefort sang backstage as if only existing in Anna’s altered mind instead of being her actual partners in the death sentence and the scaffold. But eventually music and artists won hands down. 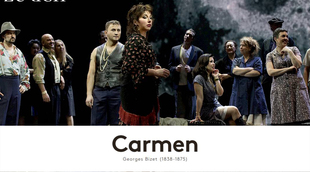