Arabella at the Munich summer Festival 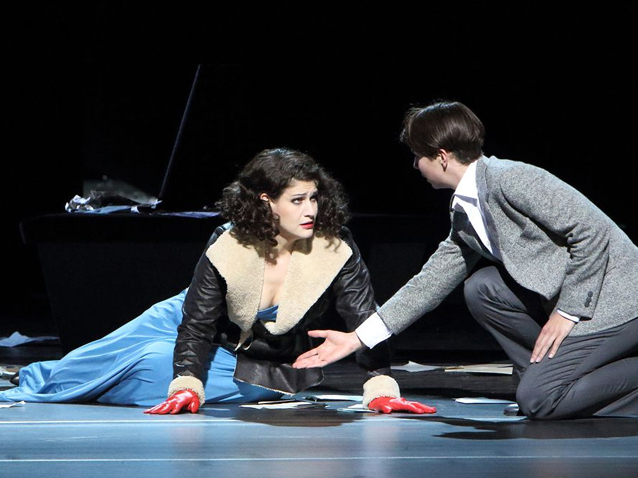 The dominating image in Andreas Dresen’s staging of Arabella for the Bayerische Staatsoper is stairs. Giant staircases grace the stage in all three acts, and important events usually involve dramatic ascensions or descensions. This suits the plot, where both relationships and fortunes suffer ups and downs. The Waldner family is looking to refill their empty coffers through a wealthy match for their beautiful daughter Arabella. She has no shortage of suitors, but she doesn’t think any of them are right until the rustic Mandryka arrives from afar. The pairing should be perfect, but Arabella’s sister Zdenka (who lives disguised as a boy) is in love with Arabella’s suitor Matteo. Zdenka arranges a rendezvous—supposedly for Arabella—and Mandryka overhears. Misunderstandings abound but are finally resolved with Zdenka’s confession. 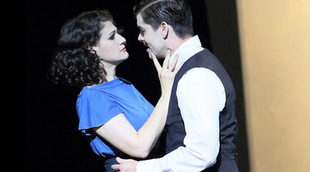 These singers are up to the challenge. Anja Harteros turns in a nuanced portrayal of Arabella, with believably complex characterization and a wonderful variety of vocal textures. Her voice blooms richly on the highest notes and retains power and color all through her range. On Saturday, an audience member tossed flowers at her feet in well-deserved homage. As Zdenka, Hanna-Elisabeth Müller has less vocal warmth but lovely, clear bell tones and appropriately melodramatic acting. The two sisters’ voices blend perfectly in their act one duet.

The suitors are a mixed bag. Joseph Kaiser’s puppy-dog-like Matteo is strong-voiced throughout, but Dean Power’s Count Elmer, though suitably suave, is vocally underpowered. As Mandryka, Thomas Mayer cuts an imposing figure—very different from the Viennese suitors’ trim, proper appearances. Vocally, he is initially sometimes inaudible but improves over the course of the opera, eventually showing off a resonant instrument with expressive harshness. His dramatic progression through fury, generosity, despair, and joy in the final act is well-played and touching.

Arabella abounds in smaller roles, all of which are well cast. Heike Grötzinger has a strong, rich sound as the fortune teller of the first scene. Eir Inderhaug’s Milli impresses with her stratospheric yodeling. Both of the Waldner parents (Doris Soffel and Kurt Rydl) are full of character, vocally and dramatically. Count Waldner’s stunned, half-mad repetition of “Teschek, bedien dich!” is particularly funny.

Led by Philippe Jordan, the Staatsorchester navigates Strauss’s tricky music well, producing lush sounds with excellent dynamic range. Singers’ voices occasionally get overwhelmed by the sheer volume and textural variety of the orchestra. Tempos are a tad slow, but enough cuts are made that the opera as a whole does not drag.

In the end, Arabella is no meek peasant woman or obedient child. She extends her forgiveness to Mandryka by offering him fresh spring water, a rustic tradition Mandryka had previously described to her. But as he is about to accept the glass from her hand, she splashes the water in his face. He responds with a show of strength: he crushes the glass in his bare hand. They seem like a good match—destined for a stormy but happy marriage.