Das Rheingold at the Ruhrtriennale 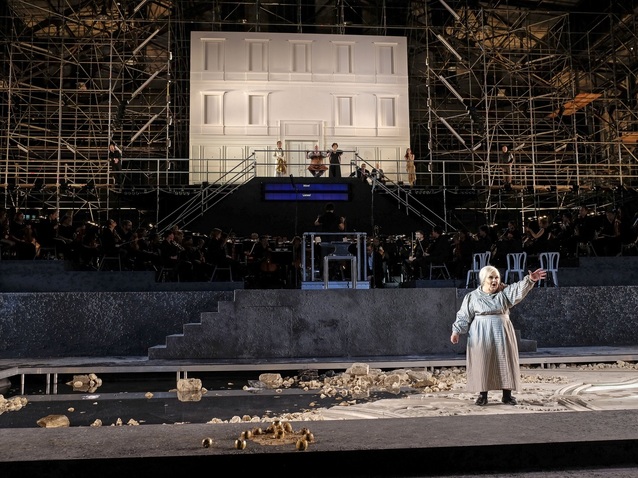 The Ruhrtriennale has its reputation for extraordinary performances at special locations, as a revival of the devastated industrial infrastructure of the area. The festival offers a mix of opera, drama, dance and concerts. Further installations, DJ sessions and Johan's saloon, set together by Johan Simons, the artistic director of the festival, sum up the schedule lasting 6 weeks.

This year the performance of Richard Wagner's Das Rheingold, the overture of the tetralogy of the Ring der Nibelungen attracted a lot of interest by the international classic audience. Next to Johan Simons as the director, Teodor Currentzis was selected as conductor together with his orchestra Music Aeterna. This young Greek conductor received overwhelming critics for his Mozart / Da Ponte opera interpretations at the opera house in Perm, at the far east of Sibiria, where he is musical director since 2011. Now it is the first encounter of the orchestra and the conductor with the German composer in a huge industrial ambience : the Jahrhunderthalle in Bochum, a former energy station of a steel factory, situated next to the river Rhine, where the gold will be stolen.
Once the audience is allowed into the premises, it is fascinated just by the size of the location. 900 people take place at the tribune facing the orchestra, placed on a podium above the shore of the river Rhine, which is more of a dried pond covering the fragments of once a luxury home, all up side down. High above the orchestra the white walls of the newly built Valhalla, the future home of the Gods, are shining.

Casual in a black shirt and a black stretch trouser with his typical hair cut, the eccentric Greek talent takes his position in front of his orchestra formed by young Russians musicians. They follow him like a magician full of spirit, concentration, emotion and with a good portion of self confidence. Before the orchestra starts, the hall is already filled with electronic sound, bundling more and more in the tone, on which the overture has its roots out of nowhere.
Erda is wading in the river banks and sits down to follow the plot. Expressive, energetic the river grows to a full romantic sound, pushing vividly forward but under full control of the conductor. The violins beautifully gain on volume and warmth. Teodor Currentzis motivates, drives them forward with his gestures as well as tames them not to break out.
Every wave, every obstacle in the river can be felt. Alberich approaches the daughters of the Rhine full of male sexual desire, carrying finally a big stone in golden colour away. Johan Simons strips the story down to a thriller of greed, sexual lust, decadence and power. He even adds a drama part in the middle of the opera once Wotan and Loge are leaving for Niebelheim. He has added one character to the cast in the person of the servant of Wotan, Sintolt who outs himself as a rebellion, accusing the social economic system for imbalance and robbery. Using a megaphone, Sintolt screams his propaganda style political message and the orchestra stands up, picks up a hammer and starts to demolish the tribune of the audience.
There is a cut in the flow of the opera, the add on does not fit or contribute in any value to the plot, it just raises misunderstanding and distraction. Once the musicians are back, Teodor Currentzis returns with his perfect musical interpretation and the orchestra demonstrates its class with temperament and exactness. In the final orgiastic density, they finally play standing up. Once the last tone disappeared under the roof of the huge hall, a similar ecstatic explosion from the audience arises. They fanatically merit the orchestra and the conductor, as well as most of the singers: Jane Henschel as Erda and Mika Kares as Wotan lead the performances of the singers with their immaculate singing. Leigh Melrose lacks of dark poisonous timbre as Alberich, Maria Riccarda Wessling misses expression and color as Fricka. Frank van Hove and Peter Lobert are two strong and voluminous giants, just their personal appearance differs considerably. The director and his teams get similar acceptance for a dramatical narration of the story as a political fight more than a fairytale of gods, dwarfs and giants.