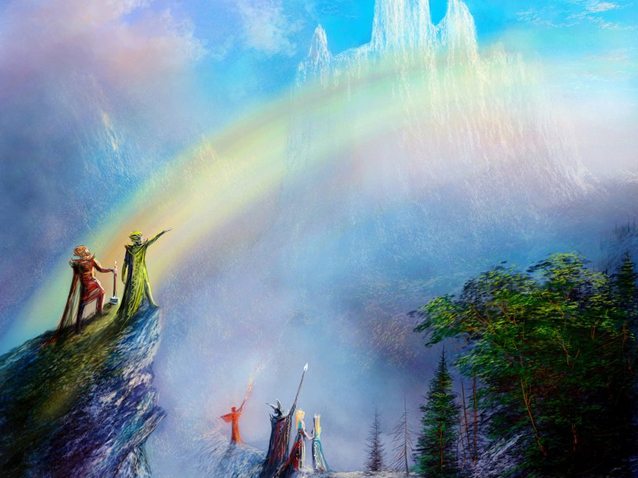 In this world of “Heroic Fantasy” before there even was such a thing, where Gods mingle with humans and dwarfs with giants, the prologue to the Ring of the Nibelung, “Rhein Gold”, starts off this mythic epic, which attempts to provide an answer to the mystery of origins, seeks to explain the meaning of the trials in the destiny of human lives and show the reasons that cause societies to disappear. All these heroes are mirrors in which we all can see ourselves. This masterful work is carried along by madly inventive music of infinite richness and a fascinating evolution.

The action in this prelude takes place in a legendary era, in the waters of the Rhine, on and in the bowels of the Earth and the abode of the Gods.

The Rhine Gold has been stolen by a misshapen dwarf before being recovered by Wotan, Lord of the Gods, and turned over to Fafner, a giant, as payment for the construction of the megalomaniacal fortress which the Master of the Gods had built for himself.

At the bottom of the Rhine, three nymphs (two sopranos and a mezzo soprano) play as they guard the Rhine gold. The hairy dwarf nibelung Alberich (bass baritone) takes possession of it after vowing to renounce desire..

Wotan (bass baritone) is the supreme and omnipotent master of the abode of the Gods. Freia (soprano), the goddess of eternal youth, has been promised to the giants Fasolt (bass baritone) and Fafner (bass) who built Wotan’s castle. Facing the wrath of the other Gods, who want to preserve youth and long life, Wotan proposes to the two giants that Freia be replaced by gold, which he goes off to seek in Alberich’s lair.

Using the gold stolen from the Rhine, Mime (tenor), Alberich’s brother, has forged a ring and a helmet, making him omnipotent. But Wotan uses a ruse to relieve him of them. Alberich then curses all future possessors of the ring and vows to recover it.

Then the curse takes effect; Fafner kills Fasolt before fleeing to hide his loot, while the Gods rejoice over their rediscovered youth.

Das Rheingold at the Ruhrtriennale

Helmut Pitsch
Published on the 17 of September, 2015

Helmut Pitsch
Published on the 18 of February, 2014
See all columns