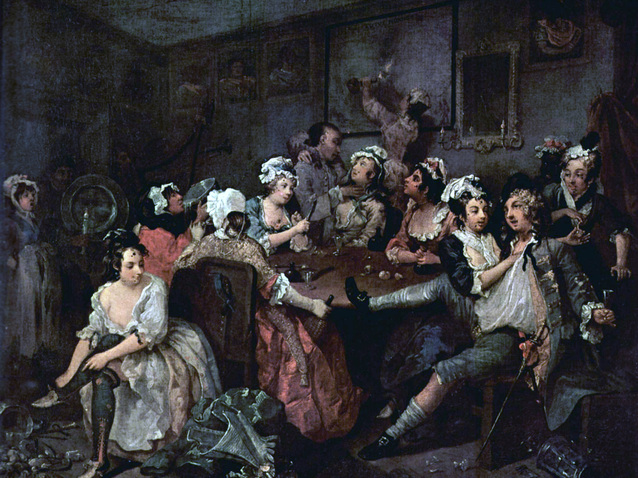 “Can a composer reuse the past and, at the same time, forge ahead? Whatever the answer is, this academic question did not concern me as I was composing the work.” These words from Igor Stravinsky seem to dismiss the heated comments raised by a unique work that takes on tradition in order to better transform it. Introduced as Stravinsky’s last work from his “neoclassic” period, The Rake’s Progress was composed between 1948 and 1951 based on a series of eight engravings by the painter William Hogarth, entitled “A Rake’s Progress” (1732-1733). They illustrate the gradual decline of a lazy and profligate young heir who squanders his fortune on gambling and pleasure only to end up in the Bedlam insane asylum. Stravinsky immediately saw the possibility for a sequence of opera tableaux in this series, giving him an opportunity to bring back to life the atmosphere of the 18th century. His writer friend Aldous Huxley put him in touch with poet W. H. Auden, considered the English Paul Valéry, to write the libretto, which departed from the original model in many respects. The cynical rake becomes a weak, lazy and dreamy man, led to his doom by a blend of Mephistopheles and Leporello, both master and servant. The Faust legend is not far off, with the proffering of a pact that turns into more of a deal gone wrong.  Especially when the character of Anne Trulove is added in: representing “true, redeeming Love”, embodied by Elisabeth Schwarzkopf when it was created. The shadow of Don Giovanni also hovers over this carefully wrought libretto, which is driven by the sheer pleasure of theatrical invention. At first Stravinsky was criticised for having composed a pastiche, a mere “summary of a Mozart opera” (André Boucourechliev), symptomatic of a crisis of inspiration. Mozart may serve as stylistic reference for the score, in which we can also detect the influence of Rossini and Donizetti, but that did not prevent Stravinsky from asserting his own musical language of tonal and harmonic ambiguities. The work became a repertory staple in the late 1970s, precisely because of this strangeness, the result of an astonishing balance between pastiche and modernity, past and new perspectives.

Summary
The action takes place in 18th century England. Tom Rakewell sets off for London after he receives a providential inheritance. He leaves his fiancée behind so that he can better give himself over to libertinage, with the complicity of the disturbing Nick Shadow whom he has taken on as servant. Ruined and disillusioned, Tom ends up betting his soul at cards with his servant, who reveals himself as the Devil. Anne Trulove, his ever-faithful fiancée, allows Tom top save his soul in extremis, but he sinks into madness before losing his life.

In the garden of his fiancée Anne Trulove, Tom Rakewell celebrates springtime and love with her. Enter a stranger, Nick Shadow, who has come to inform the destitute young man that a providential inheritance awaits him in London. Tom sets off unhesitatingly with the one who will become his servant and master as he begins his career as rake in Mother Goose’s brothel. When autumn comes and Anne has still not heard from him, she sets off to join him in London.

In his London home, Tom, now disenchanted, complains that he is unhappy despite his wealth and the pleasures of which he has grown tired. After money, his second greatest desire is to find happiness. Nick Shadow convinces him to marry a bearded lady, Baba the Turk, in order to become famous. When Anne shows up, Tom declares that he is now unworthy of her love. The despairing girl flees. Nick Shadow then brings in a machine that is supposed to turn rocks into loaves of bread. Tom imagines that he will become humanity’s benefactor with this mechanism, which is nothing more than a trick. To fulfil his last wish, Nick advises Tom to begin using the machine.

The trick machine has ruined Tom, and his furniture is being sold off at auction. Baba abandons Tom and advises Anne to try to save him. A year and a day have passed since the appearance of the disquieting Nick Shadow, who now calls in his wages. He wants Tom’s soul and orders Tom to kill himself. Finally playing fair, the Devil agrees to give Tom a chance if he turns over three cards before the stroke of midnight. Assisted by Anne, Tom manages to save his soul, but he sinks into madness and dies in exile, among the insane.