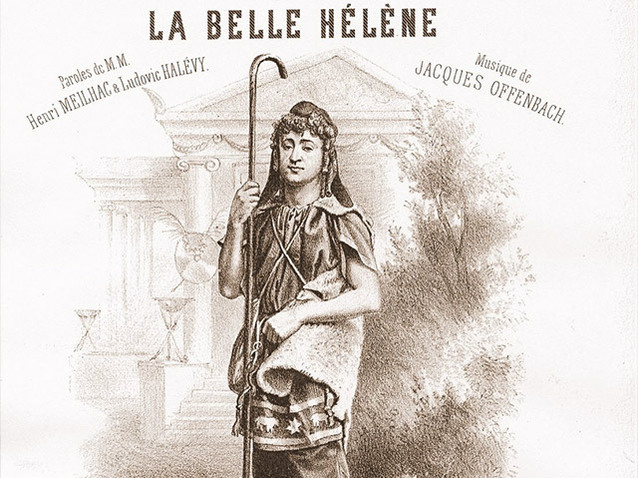 The huge success that greeted La Belle Hélène marks the debut of the “Offenbachiade”, a word allegedly invented by Alphonse Daudet to designate the apogee of the composer’s career. From the 1864 creation of this irresistible Homeric epic until the fall of the Second Empire in 1870, hardly a soirée passed in Paris without a performance of an Offenbach work. La Belle Hélène was the triumphal result of the first collaboration among those who would become inseparable partners: the musician, Offenbach, his two talented librettists Ludovic Halévy and Henri Meilhac, and the unforgettable Hortense Schneider who created the role. Nietzsche was among the admirers of what is considered to be Offenbach’s masterpiece. This side-splitting parody of Helen’s kidnapping by the shepherd Paris, the source of the famous Trojan War, was the excuse for a scathing critique of Second Empire society and its lack of morality and rampant thirst for pleasure. Every impertinence against the regime is justified by the story of the adulterous loves of the beautiful Helen, daughter of Zeus and Leda (and hence a swan), which is to be expected of a “tart” as the libretto calls her. The work’s formidable success cannot be explained merely by this farcical verve or grand-opera pastiche in the style of Meyerbeer (difficult for a 21st century audience to appreciate); the wealth of melodic creativity, the art of adapting the score to each dramatic situation, the musical balance between distance, emotion, derision and sensuality and the refinement of instrumental inventiveness are all qualities that make La Belle Hélène a success worthy of the operas of “serious” composers, who often despised the genius of Offenbach, a victim of groundless prejudices.

Summary
In Sparta, the beautiful Helen waits anxiously and impatiently for Venus to keep her promise to the handsome shepherd Paris, who is to receive as his reward the love of the world’s most beautiful woman. The wife of Menelaus can lay claim to that title, but she knows her virtue wavers. And when Paris brings back proof “intended for things of the mind”, the lightning bolt is inevitable: poor Menelaus has to depart immediately for Crete, as decreed by Jupiter in person. Succumbing without much resistance to the fate that causes her virtue to “collapse”, Helen gives herself to Paris in the sweet illusion of a dream. The lovers are surprised by Menelaus’s return, and Paris must leave, but he vows to come back! In reprisal, Venus inflicts an epidemic of marital infidelity on Greece, which leads the divine Calchas and Agamemnon to beg the reluctant husband to give his wife to Paris to save the country’s honour.  The handsome shepherd, disguised as Venus’s envoy, manages to carry Helen off in a boat that sets sail to the great despair of Menelaus. The Trojan War will indeed take place.

In Sparta, during a ceremony held by the divine Calchas, Helen prays to Venus, who, she knows, has made a promise to the handsome shepherd Paris. As reward, he is to obtain the love of the world’s most beautiful woman. Is that not Helen? She knows her virtue wavers despite her desire to remain faithful to her husband, King Menelaus. Paris arrives disguised as a shepherd. He is immediately thunderstruck. The cortege of kings advances, coming to open the games. (Ces Rois remplis de vaillance –plis de vaillance –plis de vaillance…These Kings filled with valour – folds of valour, folds of valour) Agamemnon introduces a contest intended to discover clever people. Paris is quickly declared the winner. When he reveals his true identity, he astounds those in attendance and elicits enthusiasm from Helen, who invites him to dinner. To get rid of the husband, an oracle of Jupiter arrives just at the right moment. Menelaus is invited to leave as soon as possible for Crete…

In her apartments, Helen prepares to receive four kings. She questions Venus, who takes “pleasure in bringing down virtue” (On me nomme Hélène la blonde… They call me Helen the Blonde…). When Paris shows up, she resists him. Then the three kings come in, to play a game of snakes and ladders, which Calchas wins by cheating brazenly. Feeling her strength fading, Helen asks Calchas to allow her to see Paris again in a dream. The dream quickly becomes a reality for the two lovers (Oui, c’est un rêve, un doux rêve d’amour. – Yes, it is a dream, a sweet dream of love). Alas for them, Menelaus returns unexpectedly, seeking vengeance, and forces the handsome shepherd to leave, defying the threats of the three kings outraged by his audacity.

In Nauplia, Orestes, in an atmosphere of jubilation, explains that Venus has placed an amorous lunacy in the heart of the women to avenge the departure of her protégé, Paris.
The adulterer reigns supreme, to the point that Calchas and Agamemnon beg Menelaus to sacrifice himself to save the honour of Greece by giving his wife to Paris. Menelaus refuses. He has invited Venus’s high priest to find a solution. When the high priest arrives aboard a boat flying the flag of Cythera, no one recognises the disguised Paris. The handsome shepherd succeeds in kidnapping Helen and sets sail, unconcerned by the threatening fury of the kings of Greece. The Trojan War appears on the horizon.