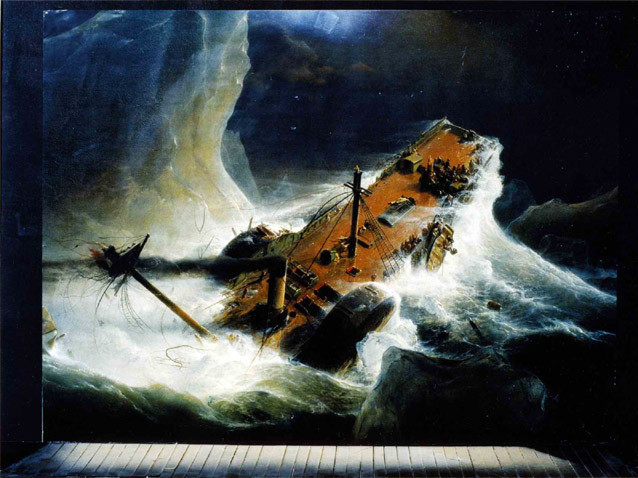 The magic of this fantastic opera lies in its ability to satisfy Wagner fans and those who, more attached to the Italian style, prefer the work of Verdi or Puccini...It is clear that The Flying Dutchman, Wagner's first masterpiece, is haunting.The music is rocked by the sound of waves as soon as the curtain rises, a sound that grows irresistibly, penetrating the listener’s mind, wrapping itself around each word and character. The drama unfolds relentlessly, based on a story that never fails to fascinate, even those who do not believe in legends. Using a number of leitmotivs (musical themes) that he presents, hides, transforms, and draws out, with an acute sense of effects, Wagner takes his audience on an irrational journey, where the Dutchman, an otherworldly, supernatural being, seeks Redemption through the love of a faithful woman.  It is a breathtaking story of sacrifice, punctuated with raging monologues, dizzying duets, rousing choruses and accompanied by an orchestra that is much more than a background for the voices, acting as a full-fledged player in the drama.

Every seven years, the Flying Dutchman, who is condemned to roam the sea for having defied God, is cast ashore and can seek redemption.Only the love of a faithful woman, willing to sacrifice her life for him, can release him from his curse. Tempted by his wealth -and unaware of his destiny - a Norwegian sailor named Darland agrees to give the Dutchman his daughter Senta’s hand in marriage. Betrothed to Erik, Senta nevertheless remains fascinated by the legend of the Flying Dutchman. When her father introduces the stranger she immediately promises to be faithful to the mysterious man forever. However, Erik's bitter argument with Senta causes this new relationship to unravel. Convinced he has been betrayed, the Dutchman reveals his curse before setting sail on his ghostly ship in his eternal quest for redemption. Desperately in love, Senta throws herself into the sea, thus saving the Dutchman’s soul.

A storm has broken.Daland's ship seeks refuge in a quiet bay. On board the sailors retire, leaving the helmsman on watch. He falls asleep. A ghostly vessel appears. The captainis a Dutchman who, because he once defied God, is cursed to roam the seas forever without rest. Every seven years the waves cast him ashore. If he can find a wife who will be true, he will be redeemed and released from his curse. He laments his fate and invokes the Final Judgement.

Daland and the Dutchman have become acquainted.Without revealing his fate, the Dutchman has made a deal with Daland, who has promised him Senta's hand in exchange for a treasure. Will Senta be the one to free the Dutchman from his curse? Though she was engaged to Erik, the young woman has always been fascinated by the legend of the Flying Dutchman. She wants to be the one to set him free.

The Dutchman of Senta's imagination is now standing before her, as if by magic.After rejecting Erik, who tells her of a strange dream, Senta swears to be true to the Dutchman until death. She is charmed and the stranger is sure he will finally be delivered.

The sailors have returned and are engaged in merry-making.Their joyful singing and dancing contrasts with the mournful sounds coming from the ghostly vessel moored nearby.

The festivities are over and danger looms.Erik, who reproves Senta for deserting him, tries to convince her to take him back: did she not promise to love him in the past? The Dutchman overhears their conversation and believes he has been betrayed. He tells Senta of the curse and reveals he is the Flying Dutchman. He sets sail, believing his only hope for salvation has been lost. In a final desperate gesture, Senta throws herself into the sea. As the ghostly ship starts to sink, Senta and the Dutchman are seen ascending to heaven. 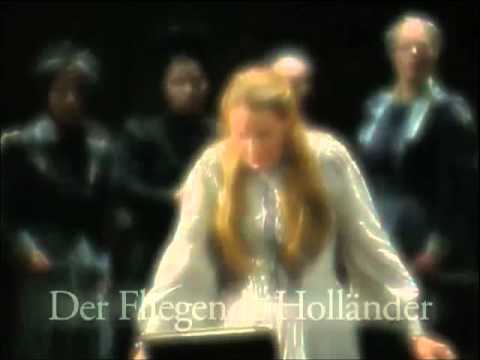 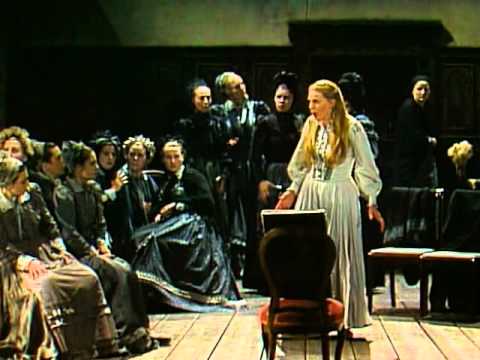