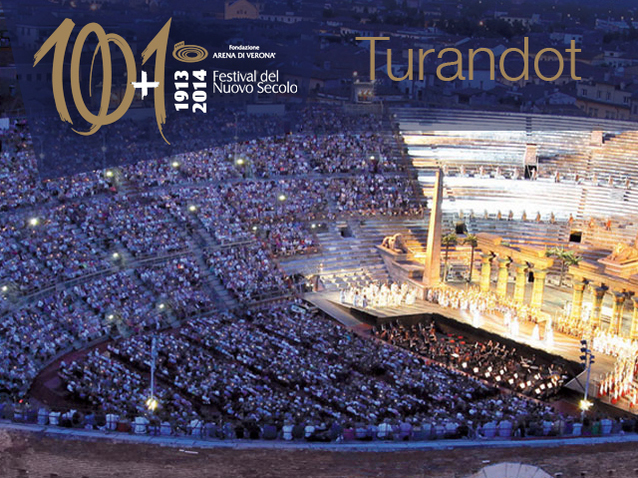 The idea to base the opera on one of the most famous theatrical fables by Carlo Gozzi, Venetian playwright from the 1800s, contemporary and rival of Carlo Goldoni, began during a meeting in Milan the winter of 1920 between Puccini and the librettists Adami and Simoni.

Puccini put his collaborators to work straight away and already by August 1920 the principal changes had been made to the original draft. Adami and Simoni, the first lyricist and the second author of the story, wrote the libretto and they had to adapt it many times to respect the requests of the composer. The most important difficulties were caused overall by the fabulous characters who were the Gozziani people, lacking in the pathos which Puccini requested. The ushers in the original version of the fable were transformed by the authors into the trio, Ministers Ping, Pang and Pong who represent the greatest part of the Chinese music in the opera. The character Turandot, instead, becomes an obstacle in the construction of the opera due to the strong change of the character. At the end the heroic depth of Prince Calaf and the introduction of the character Liù, with her sacrifice for love, are innovative elements and typical of Puccini's style.

At the beginning of 1921 Puccini had already begun musical composition with the help of a Chinese Carillon which belonged to the art collection of his friend Fassani and thanks to the pieces of folk music supplied by Ricordi.

Nevertheless the instrumentation of the first two acts was concluded only in February 1924. The third act remained incomplete, as the author wasn't able to imagine a logical dramatic ending, especially for the great final duet between Calaf and Turandot, which had already been revised at least four times.
From this moment on Puccini continued to work frenetically on the opera, interrupting his work only to holiday abroad or to correct the score.

At the beginning of 1924, while work on the score proceeded with highs and lows, the composer showed signs of the first symptoms of the illness which would lead to his death in that year. He tried to undergo some treatment, but no positive results were visible. His health then began to deteriorate, but despite this he programmed the date of the première of Turandot, even though the opera wasn't complete. He was diagnosed with papilloma, which in reality was cancer of the throat and had no chance of improving. The only way to prolong his life a little was to undergo immediate surgery and radio therapy at the "L'Institut de la Couronne" in Bruxelles. On November 24th he underwent surgery which proved to be successful. Four days later, however, the composer's heart stopped suddenly and he died on November 29th, 1924.

When Puccini left for Brussels, he took with him thirty six pages of a draft of the score from the two last scenes of Turandot - the love duet and the finale of the third act, in the hope of completing them but he didn't succeed.

Turandot - 2003The person who knew the score of the opera better than anyone else was Arturo Toscanini and it was precisely he who took on the job of presenting the opera which had been left incomplete. It was a great problem both from a practical point of view as well as the artistic responsibility. Puccini had, in fact, only completed the score up to the suicide of Liù and the funeral procession which followed. The choice for the person who had to complete the opera was not simple. Toscanini suggested to the Puccini family and to the Ricordi house that the project be assigned to Franco Alfano who completed the score for the final episode where Princess Turandot is shaken and transformed by love which is based on the music pages left by Puccini.

The première of the opera was performed at the Scala in Milan on April 25th, 1926 and was conducted by Toscanini. When he arrived at the third act, and Liù's aria "Tu che di gel sei cinta" had been sung, the maestro set down his baton and turned to the public interrupting the performance, full of emotion, saying: "this is where the composer died" and he actually stopped the performance in that precise point where the composer had finished composing.