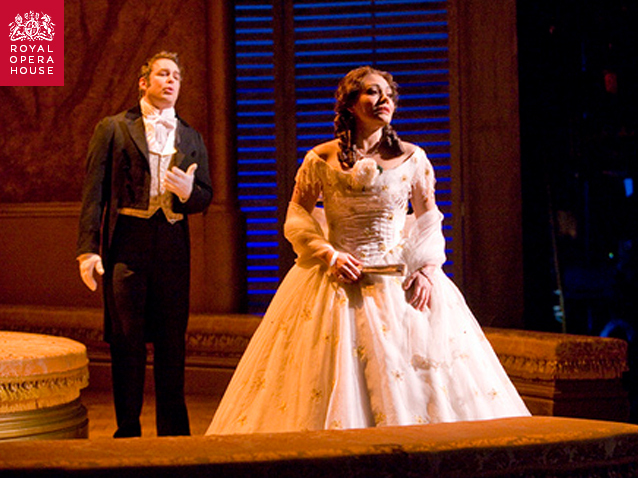 Alfredo and the courtesan Violetta fall passionately in love. But Violetta is seriously ill and Alfredo’s father disapproves of their relationship – can their love overcome such obstacles?

‘A toast to the pleasures of life!’ – so sings Violetta, her new admirer Alfredo and her party guests in the opening scene of Giuseppe Verdi’s La traviata. But beneath the surface glamour of Violetta’s Parisian life run darker undercurrents: her doomed love for Alfredo and the tensions the lovers encounter when they break society’s conventions. La traviata, based on Alexander Dumas fils’s play La Dame aux camélias, is one of Verdi’s most popular operas, combining drama, passion and memorable melodies.

Richard Eyre’s classic production conveys the indulgent social whirl of 19th-century Paris. It provides a vivid setting for Verdi’s tuneful score, which includes such favourites as Violetta’s introspective ‘Ah fors’è lui’; the duet ‘Pura siccome un angelo’ as Germont père pleads for his daughter with Violetta; and ‘Parigi, o cara’, in which the lovers poignantly imagine a life that will never be theirs. The role of Violetta (the ‘fallen woman’ of the title) is one of Verdi’s most complex characters. It was played to great acclaim by Angela Gheorghiu in this production’s 1994 premiere.