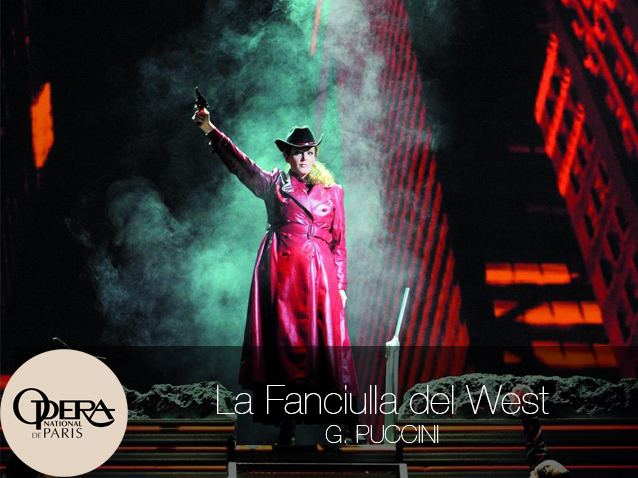 Live in UGC cinemas on February 10th, to be broadcast on a later date on France Televisions.
Live on France Musique radio and UER radio on February 22th.

"In those strange days, people coming from God knows where, joined forces in that far Western land, and, according to the rude custom of the camp, their very names were soon lost and unrecorded, and here they struggled, laughed, gambled, cursed, killed, loved and worked out their strange destinies in a manner incredible to us of to-day. Of one thing only are we sure - they lived!" Puccini prefaced his score with this quotation and, indeed, it is life itself that he aimed to capture, in a trail that would lead him to Paris in La Bohème, to Japan in Madama Butterfly and then as far as the Far West in a tale of passion, certainly, but also of humanity, brotherhood and compassion. In a saloon bar known as The Polka, gold diggers brood over mothers left behind in Italy whilst Minnie, behind the bar, reads to them from the Bible. Love will come to Minnie in the guise of a criminal but, seeing beyond mere appearances, she will recognise the true heart beneath the rough exterior and realise the possibility of happiness. In the wake of the first literary westerns and as cinema began to exploit the genre, Puccini gave opera its first ever western: a tale of souls stranded at the edge of the world, a tale of laughter and of tears, both exotic and overwhelming. First performed at the Metropolitan Opera of New York in 1910, this genuine masterpiece finally enters the repertoire of the Paris Opera.