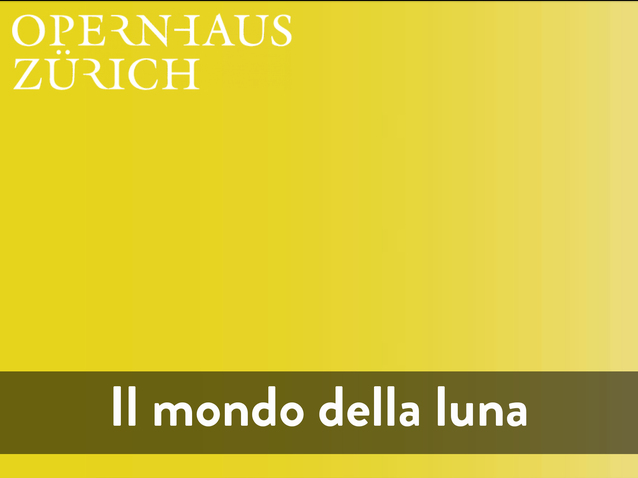 New production, which was to be premiered initially in 2020.

"Luna, lena, lino, lana, lana, lino, lunala / Burlicchete, burlacchete, brugnocchete e cucù". The moon has its own language, a lunar emperor, and rather liberal practices when it comes to romance. Bonafede, an amateur astronomer, was able to see this for himself some two centuries before Neil Armstrong’s spectacular moon landing. In 1777, the curtain rose on the premiere of Joseph Haydn’s Il mondo della luna, written for the princely wedding festivities at the Esterhazy castle. Joseph Haydn's last opera buffa, Il mondo della luna, was premièred during the princely wedding celebrations at Schloss Esterházy in 1777. Based on a comedy by Carlo Goldoni, Haydn's opera, which sparkles with musical inspiration, is an outlandish, ludicrous expedition into the infinite expanse of the imagination. But our Bonafede (whose name translates to “gullible”) is the victim of a hoax: the charlatan Ecclitico and his friend Ernesto administer a sleeping potion and stage the lunar expedition in order to get their hands on Bonafede’s daughters, whom he closely protects. In on the intrigue, his daughters assist the pair in leading him to believe that he has entered a lunar paradise. Changed by his experiences on the moon, in the end Bonafede himself tries to bring the couples together.
This International Opera Studio production, which will again be premiered at the Theater Winterthur, will be staged by the young Japanese director Tomo Sugao and conducted by the promising young conductor Joseph Bastian, winner of the Neeme Järvi Prize at the Gstaad Menuhin Festival.