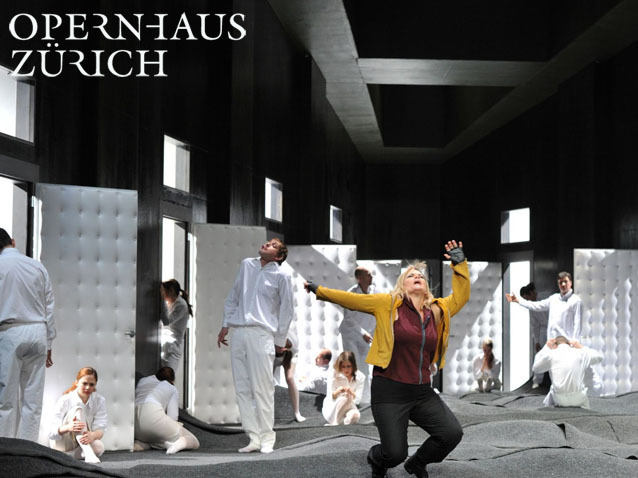 The German soprano Evelyn Herlitzius is currently celebrated as the “ideal Electra”. Last season, she gave an acclaimed performance in Zurich as the Dyer’s Wife in Die Frau ohne Schatten. Now she returns to our theatre in the title role of Richard Strauss’s Elektra.
In this opera, first performed in 1909, Strauss used a gigantic orchestra to unleash hitherto unknown sounds, and this wildly expressionist work has lost none of its impact to this day. The archaic subject matter is shocking and fascinating in equal measure: a young, infinitely lonely woman – Electra – is kept alive only by the idea of avenging the murder of her father Agamemnon. Once revenge has been exacted and her brother Orestes has murdered their mother Clytemnestra and her lover Aegisthus, Electra dances an ecstatic dance, at the climax of which she collapses and dies.
In Martin Kušej’s much-lauded production, Waltraud Meier will be singing Clytemnestra at Zurich Opera House for the first time, while Emily Magee can once again be heard as Chrysothemis. Strauss expert Lothar Koenigs, Music Director of the Welsh National Opera, will be at the rostrum.