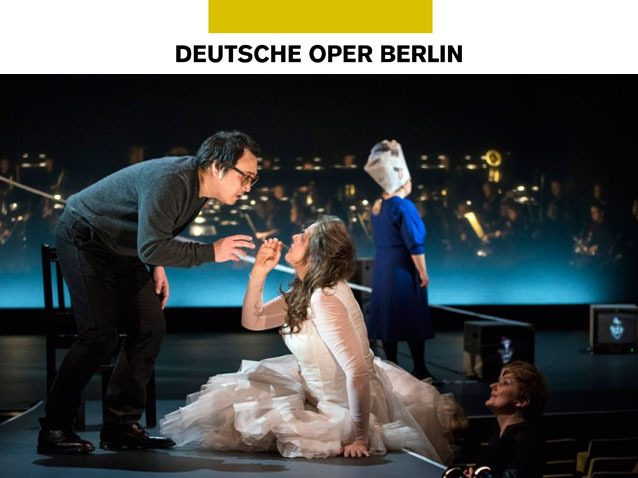 “Amore, sommissione, dolcezza” were the words used by Verdi to describe his eponymous heroine Aida, an epitome of love, docility and tenderness. Aida joins a list of female protagonists in the art of the 19th century who were not so much flesh-and-blood characters as objects of yearning and a projection screen for male chauvinist dreams and inevitably ended up dying of a broken heart. Aida is no different here, although, in a departure from the format employed in Verdi’s previous operas, AIDA offers an antithesis to doomed love in the form of Amneris. “Molto vivacità” is how Verdi describes her in his list of characters. Amneris is a bundle of vitality. She fights like a lioness to defend her love and is capable of having a solid, committed relationship. Radames, on the other hand, wavering between Aida and Amneris, cannot bring himself to opt for real life. He surrenders to his dreams and fantasies of having an exotic woman from distant climes. At the same time he’s pursuing an ambitious career within a rigid, ideological system. In public he quickly acquires star status. Yet he quickly sees that he cannot escape the pressure exerted by society, not even in his private life. And so it is that his dream of love becomes a matter of public interest.

As such, director Benedikt von Peter sees Verdi’s grand opéra AIDA as a fragile and intimate play about love, a work that is tracked by countless pairs of eyes, and he delivers a production that draws in the entire auditorium of the Deutsche Oper Berlin. With his directorial work and often unconventional use of space von Peter has created a stir in recent years at the opera houses of Basel, Hanover, Frankfurt and Bremen. He has won the Götz Friedrich Prize and the DER FAUST Award for German drama.

Helmut Pitsch
Published on the 27 of November, 2015
See all columns