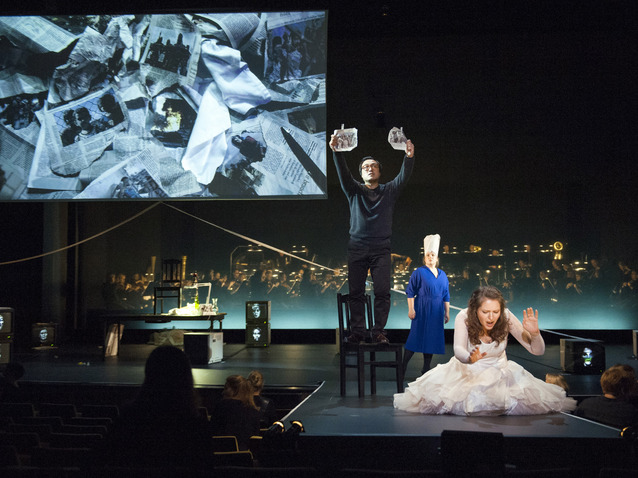 Benedikt von Peter, currently head of at the Theater Bremen and designated head of Lucerne theater from 2016 onwards, has gained reputation for sophisticated deeply analytical directions of operas, opening new views on characters, their relations and plots. Focussing on libretto and strongly on the musical composition, he gains new aspects which he consequently transfers into his realisation. Some key elements of his view on Aida have been published before the opening evening. He emphasizes on the emotional life of Radames, the role of love and the triangle relation : Radames , Amneris, Aida. Here he sees a congruent situation with the life of Guiseppe Verdi and his relation to his wife Guiseppina Strepponi, and his alliance with the singer Teresa Stolz at the time of the creation of Aida.
Additional expectations were raised by the announcement that parts of the orchestra and other participants will be seated in the audience and that admittance is only allowed 5 minutes before the performance starts.

It is a lifely excitement in the elegant Berlin Premiere audience before finally the doors open and the flow of people begins. Everybody scans the auditorium. Radames is already sitting on the stage floor, embracing a white dress. The orchestra pit is covered so he can be close to audience, in addition there is a small ramp into the first rows. There is a simple table on the left side of the stage with some books on it. The view on the surface of the table is directly transmitted on a large screen hanging above. So we see some picture books about Egypt, some historical guide books, a big old map of the Nile valley and an empty cup.
The music starts and the lifting curtain opens the view on the orchestra sitting on the stage behind the small scene for Radames home. Next to the elegic romantic music, Radames stands up, returns to his table and picks up a pale historical picture post card of the Nile valley with palms and pyramids, representing a kind of hidden desire. Amneris comes in and starts to clean up the table, Radames watching with a remote distance. We realise, that this must be a daily life scene of a couple who has lost their caring feelings, a mute partnership without affection.
Ramfis appearance, sitting somewhere in the audience is like an extraterrestrial contact of Radames. He is joined by members of the choir dispersed in the audience too, an effective setting and the first scene of the opera develops into a thrilling and very direct musical experience, as everybody has one of about 80 members of the choir close by his side. Radames falls into his own world of thoughts and desires, the audience is getting ready to follow him. Aida presents herself as his imagination of the perfect, true and pure love, which he will never meet or reach. Aida is the third person to act on stage, even if she does not really exist, her dress symbolizing her existence in Radames existence. Amneris is aware of Radames dreams and her competitor. She fights to win Radames back, preparing sandwiches, serving meals and tenderly flattering Radames, but she realises her lost battle and finally suicides while Radames is burying Aida and mourning.
There is no happy end, nobody unifies in love, whereas everybody is looking for it.

The impressive point is that even far away from the normal splendid practice of performing Aida with mass scenes and exotic flavour, the music does harmonize. Next to the general new sound experience having the orchestra on stage and singers in the audience the careful listener discovers new aspects and details of the partiture.
Andrea Battistoni is a very young conductor, who internalizes the direction. With wide and expressive gestures like an eagle, he guides well the orchestra, the choir and singers all over the house. He vividly elaborates the romantic lyric music and we meet the dreamlike soft and melodramatic part of the music. Some additional electronic music applications as for the Nile scene enrich the spaeric fey ambience.
Alfred Kim takes the "now" central part of Radames, having a strong voice, volume and generally safe heights, but lacks embedded timbre and colour. Next to the sophisticated characterization of his role, he remains less flexible and lyric. Tatjana Serjan is similarly overdramatic as the phantom love Aida. Anna Smirnova implements von Peter's concept and spans her image from a frustrated housewife to a fighter for her beloved husband, next to a phantasy competitor by using all the flexibilty and variety of her warm dark mezzo. Ante Jerkunica is a sonor Re and Simon Lim shows a broad and elegant bass as Ramfis. Markus Brück has to sing Amonasro from far behind the stage, so he loses intimacy and presence.
As expected the audience is strongly divided between total denial and strong support for the direction. Bravi and Buh keep in balance and controversial discussions will accompany this production. This is certainly a revolutionary concept of presentation, but intelligent and conclusive with some minor logic weaknesses. It is another good example of German 'Regietheater'. Lacking of the normal mass scene and expected exotic touch, it will be interesting to see the general acceptance by the audience in future.