> Home > Columns > Xavier Pujol > L’italiana in Algeri at the Liceu: The Craziest Rossini

L’italiana in Algeri at the Liceu: The Craziest Rossini 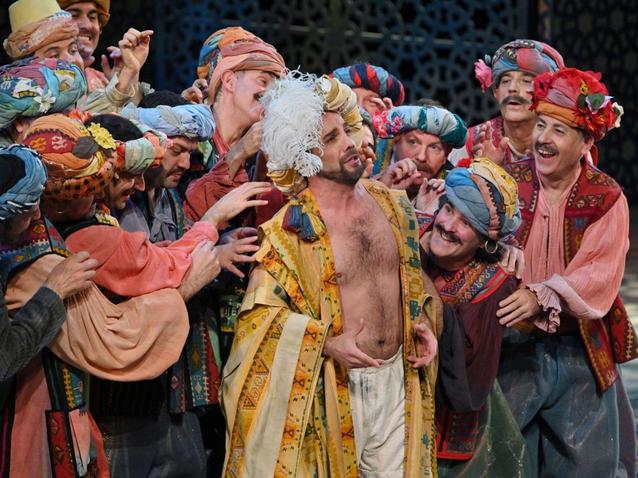 Liceu has chosen L’italiana in Algeri by Rossini to close the year, an opera premiered in 1813 in Venice, which therefore precedes Il barbiere di Siviglia, La Cenerentola and Il Turco in Italia. This is and opera that reached Barcelona quickly, in 1815, but of which in two centuries only 13 performances have taken place. The last ones were in 1982 in a memorable production directed by the late Jean-Pierre Ponnelle.

This work, with a libretto by Angelo Anelli, consists essentially in a sort of Italian and buffa version of the Mozart title Die Entführung aus dem Serail, except here it is she who rescues him. 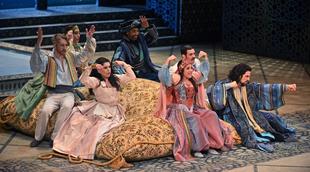 With an added minimal refection around the cultural shock, the eternal battle of the sexes and a bit of early feminism, L’Italiana in Algeri, is theatrically speaking a light farce, including however some of the most hilarious, delirious and crazy Rossini moments.

The end of the first act, with all characters on stage singing onomatopoeic text seems extracted directly from a Marx brothers film.

The production, coming from the Teatro Regio of Torino, with Vittorio Borrelli as stage director, scenography by Claudia Boasso and costumes by Santuzza Calì, dates back to 2009, although it appears over 30 years old. Everything works perfectly but it is all a little dated and quite predictable.

The stage direction pushes the characters into parody. Whilst in the first act the dramaturgy navigates still within the realm of comedy, in the second, less strong dramatically in the original piece itself, everything tends often to a style of vaudeville, panto and vulgar jokes.

Musically, the performance went quite well on the night of the premiere. Riccardo Frizza maintained good tempi: slow and very cantabile for the sentimental arie and lively and sparking in the great comical concertanti, which he managed to bring together. The orchestra started a little blurry, especially the higher strings, but grew in quality throughout the performance. The choir’s entry was rather grey and unbalanced but also improved and ended well. 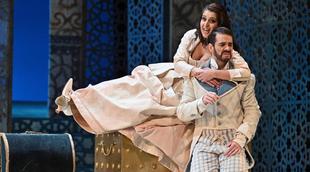 In terms of the vocal soloists it is worth highlighting that the singers in main three roles were debuting at the theatre. The bass-baritone Luca Pisaroni delivered a robust Mustafà despite the lower register ornamenti being a little weighty for him, especially in the beginning, which didn’t quite flow. Tenor Maxim Mironov, on the role of Lindoro, has a small, clear voice with little projection but sings with great style, phrases the melody very well and attacks the higher notes with clarity and without tensing. The debuting trio was completed in the role of Isabella, the title’s italiana, with Varduhi Abrahamyan, a mezzo with a powerful yet agile lower register who also delivered a good performance.

Baritone Giorgio Caoduro, who had performed at Liceu in Lucia di Lammermor on the 2015-16 season, did an excellent Taddeo both vocally and scenically.

Also excellent were the singers in minor roles. Baritone Toni Marsol did a great Haly, the pirate captain, and so did Sara Blanch in the role of Elvira, the rejected wife, and Lidia Vinyes-Curtis in that on the slave Zulma, who both had a great performance too.