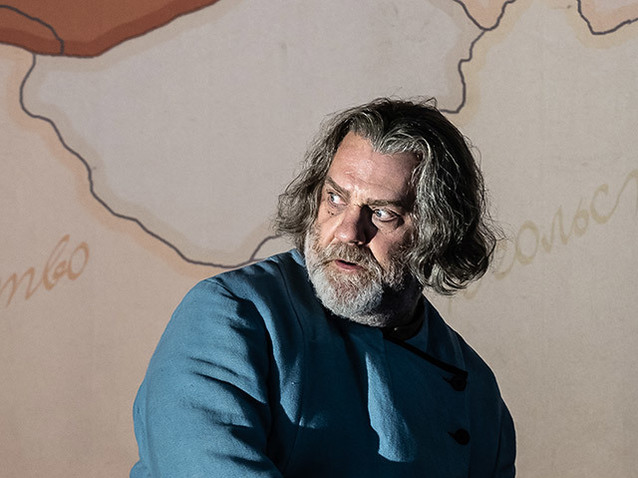 Boris Godunov is Modest Mussorgsky’s only completed opera, and is considered to be his masterpiece. Its subjects are the eponymous Russian ruler, who reigned as Tsar from 1598 to 1605, and the False Dmitry I, who succeeded him almost immediately but was killed only a year later. The Russian-language libretto was written by the composer, and is based on Pushkin’s blank verse drama Boris Godunov as well as Nikolay Karamzin’s History of the Russian State. 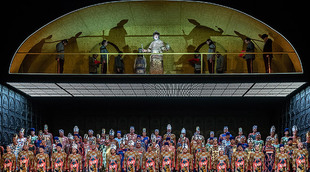 While, however, the opera’s story draws on historical fact, because differences remain it is still best appreciated on its own terms. When the son of Ivan the Terrible, Fyodor I, dies in 1598, Boris accepts the throne of Russia as Fyodor had no children. The reason why, however, there is no obvious successor is because Ivan’s far younger son Dmitry, who the Orthodox Church had never, in fact, acknowledged as legitimate anyway, died under mysterious circumstances in around 1591. Possibly in real life, but certainly in the opera, Godunov was responsible for his murder and his sense of guilt takes hold so that over his seven-year reign he descends into madness and dies a broken man. In real life, Godunov spread rumours that the person claiming to be Dmitry, who was almost certainly an imposter, was a runaway monk called Grigory Otrepiev, and this becomes the truth in the opera.

There are two versions of the work, and one of the selling points of Richard Jones’s 2016 production for the Royal Opera, which is now enjoying its first revival, is that it presents the original 1869 version in its entirety. Many productions have purported to do this, but while Francesca Zambello’s English National Opera production of 1998 essentially presented the earlier piece, it inserted the closing scene from the 1872 version, while a Proms performance from Opera North in 1992 just could not resist giving John Tomlinson the monologue from the later version to sing in the Kremlin apartments scene.

The joy of experiencing the 1869 version lies in the fact that it enables us to witness those elements of Mussorgsky’s creation that are missing from the later incarnation. For example, the people being shown as indifferent to the will of the authorities at the end of Scene I was cut to avoid offending the censor, but the episode’s inclusion is useful in revealing much about the Russian character. Similarly, the chronicler-monk Pimen’s intimate description of the murder of Tsarevich Dmitry was removed, presumably because it was felt to be too exposing of the regime, but it contributes much to the drama and chill of the narrative.

Although the changes were largely forced upon Mussorgsky, he was in some ways happy to produce a second version because he relished the opportunity to achieve a new generosity of line in Boris’s vocal part. Nevertheless, although it is true that his monologues in the earlier version feel somewhat drier, they are worth experiencing for the development of several brooding orchestral themes, with the ‘leitmotifs’ clarifying the strands of the Tsar’s political thought, personal reflection and private torment. 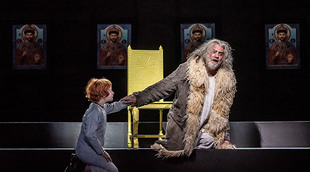 Reprising the title role from three years ago, Bryn Terfel is an excellent Boris as his firm bass-baritone combines with strong acting to convey a Tsar whose guilt and madness totally overwhelm him. Another outstanding performance comes from Boris Pinkhasovich whose excellent baritone comes to the fore in the role of Shchelkalov, Clerk of the Boyars’ Council, while Matthew Rose as Pimen, Roger Honeywell as Prince Shuisky and David Butt Philip as Grigory all play their parts to the full. As Yurodivy, Sam Furness’s pleasing tenor contrasts with Terfel’s heavier sound to highlight the irony in the fact that a fool is capable of confronting and belittling a Tsar. John Tomlinson has the robustness of voice, as well as the acting skills, to carry off the part of the monk Varlaam with aplomb, while Harry Nicoll as his ‘partner in crime’ Missail reveals equally acutely observed gestures, despite having far less to sing. Treble Joshua Abrams and Jette Parker Young Artist Haegee Lee also deliver particularly notable performances as Boris’s son and daughter, Fyodor and Xenia, respectively, while Marc Albrecht’s conducting achieves a fine balance between charge and sensitivity.

Miriam Buether’s set creates a box-like area, with a second storey embedded in the back wall standing above the main stage. Although it feels minimalist overall, there are a wealth of details to be found within it and the entire set is covered with a bell motif that emphasises their prominence in the score, the opera and Russian life more generally. Similarly, the two storeys serve to highlight different ‘realities’, whether this be the realms of the rulers above and the masses below, or through the playing out of Boris’s past deeds and present nightmares in the upper space. 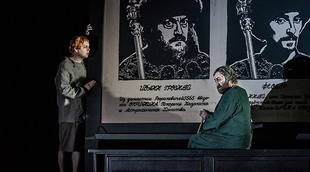 It is not quite a vintage staging because its attempts to speak to us by universalising the opera’s themes can, by the same token, impede our ability to believe in the reality of one single scenario unfolding before our eyes. Nevertheless, the set creates a spacious and uncluttered area that enables the (brilliant) chorus to confront us en masse, and individual characters to dominate while also giving us some sense of being lost souls. The fact that Nicky Gillibrand’s costumes would appear to cover quite a wide period also brings home Jones’s point that what we see is what happened to Tsars more generally. In this respect, the opera’s final image is not so much presenting a new twist to the ending of this particular story as, by drawing attention to what actually happened to Boris’s son, emphasising the cyclical nature of the events we have just seen unfold.

There are also a plethora of excellent touches. For example, Pimen’s chronicle is here represented visually with four giant pages of it standing upright, each one describing a different Tsar. The penultimate page reveals Boris and the final one bears an unfinished picture of the dead Tsarevich Dmitry, which looks very much like Grigory. This helps to add weight to the idea that when Pimen invites Grigory to write the rest of the story, the latter interprets this as meaning something other than merely chronicling the events that unfold.