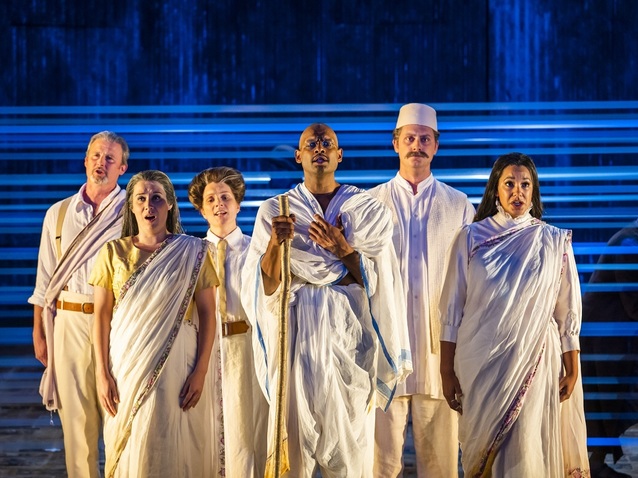 Philip Glass is recognised as one of the leading figures in minimalism today, and yet it is not a word he especially likes. This is understandable since it can severely underplay the variety of music that is all too often categorised under this one umbrella term. Glass himself has written over twenty-five operas, yet even if we look at just his trilogy that focuses on pivotal figures in the fields of science, politics and religion respectively, the styles of composition are markedly different. Einstein on the Beach, which premiered in 1976, displays minimalism at its most stark and brutal, while Akhnaten, composed eight years later, offers an extremely different and more varied palette. In between these came Satyagraha, which premiered in 1980 and explores the early active life of Mahatma Gandhi. This contains some of Glass’s most beautiful music, and can feel almost oratorio-like.

Satyagraha focuses on Gandhi’s political struggles as it explores the movement for freedom and independence, as well as his philosophy as it links the idea of peaceful fight with centuries old religious teachings. The term Satyagraha itself roughly translates as ‘insistence on truth’ and describes nonviolent resistance, with subscribers to the approach becoming known as Satyagrahis.

Although there is some narrative progression to the piece, it is more meditative than plot driven as each of the seven scenes considers an event related in one way or another to India’s civil resistance movement. For example, the third focuses on a meeting in 1906 where everyone present swore an oath to resist the proposed Black Act, and their doing so is played out in more ways than one. We see the entire chorus raise their hands, but the act is also symbolised through such actions as everyone removing their jacket and placing it on a ‘coat hanger’ that then ascends. It is this large metaphorical element to the work that means that, while the opera is accessible, it is not necessarily self-explanatory. It is performed in Sanskrit, with translations of only some of the lines being projected, and this makes investing in a programme, which contains a detailed synopsis and full translation, advisable. 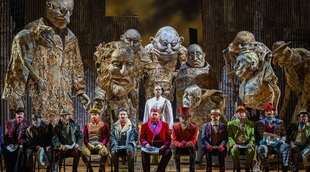 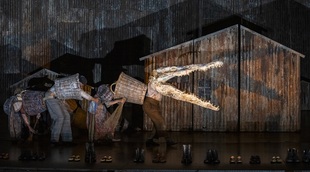 This is the fourth revival of Improbable director Phelim McDermott’s 2007 staging for English National Opera, a co-production with New York’s Metropolitan Opera, and sees Peter Relton take the helm as the revival director. Against a semicircular backdrop of rusted corrugated iron, the visual rendering of the scenes is highly effective. There are brilliantly choreographed, and often ‘slow motion’, movements, and outstanding lighting designs from Paule Constable (and revival lighting designer Kevin Sleep). The Improbable Skills Ensemble generates all sorts of effects as it seemingly conjures up puppets from discarded scraps. For example, the first scene describes the imminent battle between the Kuruvas and Pandavas. The warriors depicted are created out of such objects as wicker baskets with the puppeteers lifting these into place to form heads, torsos and limbs so that giant figures ‘magically’ appear at the moment when everything fits into place. The final scene, which depicts The Newcastle March and related Coal Strike of 1913, sees numerous tapes spread right across the stage. These are then cut and bundled up to form a huge person where the skill in the original design is matched by the slickness in execution that ensures the same effect is achieved night after night.

The ruling classes in South Africa are also depicted with huge newspaper-faced puppets that are so engaging that one soon blocks out the person standing beneath the framework of each operating the limbs. At the end of the fifth scene the puppeteers whip up the scattered newspaper into a huge whirling mass. This then provides an excellent backdrop to the falling of registration cards from the ceiling that form the focus of the next scene.

Other effects are more subtle. The second scene describes the establishing of Tolstoy Farm, a form of co-operative commonwealth, and is symbolised by introducing small two-dimensional houses to the stage. Then as the scene goes on, and the commune grows, these houses become bigger. Similarly, scene four sees people abuse Gandhi by throwing balls of newspaper at him, while the next focuses on Indian Opinion, a paper that he founded to help further the cause. 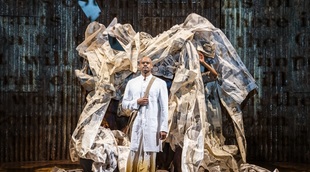 In this way, the production enchants and hypnotises the viewer just as much as Glass’s music. Although repetition is often a key component of it, there is much variation too. For example, scene four of Satyagraha writes the smug chuckles of the European men in South Africa laughing at Gandhi into the score. The scene also sees seven people work their way down this line of men, polishing each of their shoes in turn. The manner in which they do so creates a tumbling yet tightly choreographed ‘circular’ effect that offers a visually arresting image while poignantly highlighting the hierarchies at play. Similarly, the start of the Indian Opinion scene sees the puppeteers move sheets across the floor to create lines of newspaper, so that this seemingly simple action strongly hints at the mass production lines that are inherent in printing. As a result, although the volume of movement throughout the production is substantial it is the type that complements, rather than detracts from, the singing and music because it is measured out so perfectly at every turn.

The seven scenes are not always shown in the order in which the historical events occurred, but we are still given a sense of progression from start to finish. This is because all three scenes in Act I see Gandhi dressed as he might have been as a law student in England, while scenes four to seven in Acts II and III see him in the traditional garments with which he is now associated. This is in spite of the fact that scene two, for example, represents an event that took place in 1910 and scene four an occurrence from 1896.

Although there are long periods when he remains silent on stage, the evening is dominated by the character of Gandhi. After being played by Alan Oke in 2007, 2010 and 2013 and Toby Spence in 2018, he is now portrayed by Sean Panikkar who seems to embody the figure in every way. Especially in the final act, he convincingly suggests a man who possesses his fair share of physical frailties, and yet remains steadfast as he believes in the total truth of what he does. His tenor also feels entirely suited to the part as it is possessed of immense sensitivity, but can also reveal real strength and security in keeping with the resolute nature of the character. Excellent support is provided by Gabriella Cassidy, Verity Wingate, Felicity Buckland, James Cleverton, William Thomas, Ross Ramgobin and Musa Ngqungwana in the various other roles, while Sarah Pring stands out, in particular, as Mrs Alexander, who protected Gandhi when he returned to South Africa from India in 1896. With Carolyn Kuan’s conducting proving highly adept at eliciting each and every one of the specific demands of Glass’s score, this is an excellent revival of a highly significant work. 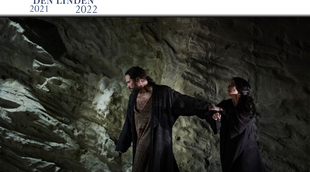 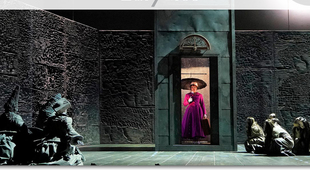