Aida at the London Coliseum 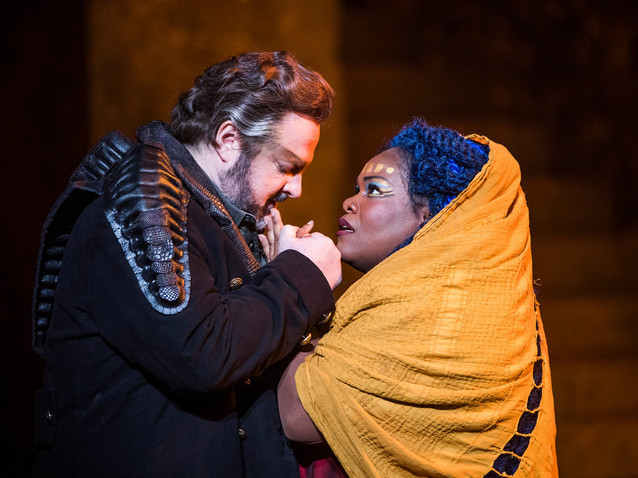 Set in Ancient Egypt, Giuseppe Verdi’s Aida of 1871 centres on a love triangle between Radamès, Amneris and Aida. As a Princess of Egypt and the daughter of the King, Amneris believes that her feelings for the Chief of the Guard Radamès ought to be reciprocated, and is horrified when she discovers that he and Aida, an Ethiopian slave, are actually in love.

When Aida’s father Amonasros is captured in battle, with the Egyptians not realising that he is the King of Ethiopia, the slave finds herself torn between her private love for Radamès and her public responsibility towards her people. Amonasros wants Aida to use Radamès’ love for her to discover the Egyptian army’s movements so that the Ethiopians can be waiting for them. Aida cannot bear to betray Radamès but reluctantly squeezes the information out of him by suggesting they should escape, and enquiring as to what route would see them avoid anyone. Radamès’ response gives away where the Egyptian army is heading, and when it becomes clear that Amonasros has overheard him give out this military secret he is charged by the Egyptians with treason. Amneris promises to intercede for Radamès if he agrees to be hers, but he says that he cannot forsake Aida, even though she has disappeared. He is subsequently found guilty and placed in a tomb, with a rock laid over it so that he cannot escape. He then discovers Aida is in there, having spied what the Egyptians were about to do and crept in so that they can die in each others’ arms. 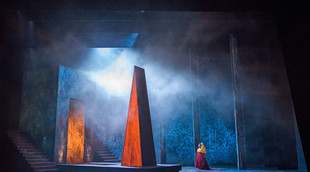 Although the opera is immensely popular, it is incredibly difficult to stage successfully. This is because it is hard to capture the exoticism and exuberance of Ancient Egypt without producing something that feels overblown or gaudy. This, however, is a pitfall that Phelim McDermott, in his new production with theatre company Improbable for English National Opera, avoids. If his ideas do not always come together to achieve an entirely coherent staging, there are certainly occasions when it works very well.

McDermott begins the drama in an extremely understated way with the Chief Priest Ramfis and Radamès simply standing in front of a black curtain. A triangle of colour appears through which there are rippling movements as Radamès sings ‘Celeste Aida’. The difficulty, however, is that even this tiny movement feels so incongruent with Radamès’ espousals against the plain backdrop that it becomes a distraction.

When the stage opens out to the full we are met with costumes and scenery that blend the ancient and modern. A pyramid stands so tall and thin that it more readily resembles an obelisk, and, with it being illuminated and surrounded by tiny palm trees, seems reminiscent of a Las Vegas feature. Many costumes mix old and new, with the soldiers’ uniforms recalling relatively recent times and some of the principals’ clothing feeling more traditional. However, because crossing eras seems to be the objective in its own right, rather than the means to saying anything deeper, it can make the staging feel sterile because it seems devoid of a greater purpose.

On the other hand, the movement employed does support the drama well, precisely because McDermott knows how to introduce dynamism while ensuring that everything still feels just a little understated. In this way, he employs a Skills Ensemble of dancers and acrobats, based on the female-led theatre company Mimbre, with Lina Johansson as the movement director. They provide a stream of continuous, ‘slow motion’ movement around the High Priestess, which feels exotic as it involves creating swirling effects with swathes of red silk. They are also very athletic as they stand on each others’ shoulders or perch upside down on each other against the pyramid. It is a slight shame, however, that a few mistakes can undermine key moments. For example, when the High Priestess first sings over half of the audience would be unable to see her properly because two columns obstruct the view of her. 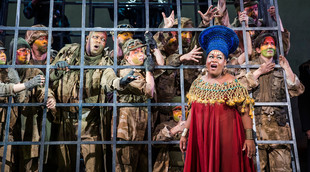 The final scene of Act II is very successful. This normally involves a march in which, among other things, the captured Ethiopians are proudly paraded. Here, however, the same music is used to carry aloft the coffins of dead Egyptians. As we see their fellow soldiers comforting the parents, the march is entirely transformed from a display of triumph into one of obvious sorrow. It takes great skill to take such a well-known piece, use it to portray the complete opposite to what we are used to seeing, and yet make it work, and this is what McDermott succeeds in doing. It is also the point at which the use of more modern costumes comes into its own as the scene’s presentation feels modern in the sense that it ties in with contemporary feelings regarding the futility of war.

Acts III and IV are more conservatively staged, but they feature fewer mass scenes anyway, and spend more time focusing on a few individuals. In this respect, the simpler staging works with the grain of the piece, and these two acts feel extremely strong because the principals sing so well. Gwyn Hughes Jones is an outstanding Radamès whose tenor seems capable of scaling any height, while Latonia Moore is equally commanding as Aida, revealing an exceptionally versatile soprano that displays great shape and focus while also impressing with its sheer quality of sound. There is also good support from Musa Ngqungwana’s Amonasro, Michelle DeYoung’s Amneris, Matthew Best’s King, Eleanor Dennis’ High Priestess and Robert Winslade Anderson’s Ramfis (the latter replacing Brindley Sherratt at short notice for opening night). Keri-Lynn Wilson conducts well, achieving lithe playing that displays real drive and yet still achieves a degree of delicacy through the strong delineation of the different orchestral lines.