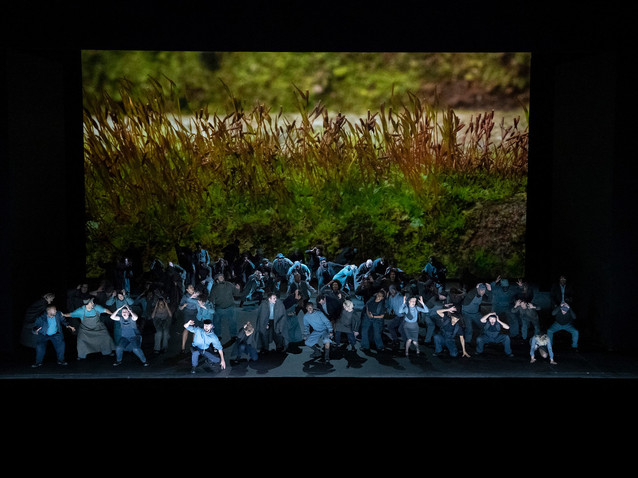 While most composers’ settings of the Catholic Church’s Requiem Mass were written to honour departed individuals, Benjamin Britten’s War Requiem is rather different. It was commissioned to be performed at the consecration of the newly built Coventry Cathedral in 1962, the old structure having been bombed during the Second World War. It was therefore designed to commemorate all lives lost in war, and, although circumstances prevented this from happening, it was planned for the soloists at the first performance to be British, German and Russian in the spirit of reconciliation.

Britten’s creation interweaves the traditional sections of the Mass for the Dead, sung in Latin, with the English poetry of World War One poet Wilfred Owen. It is the synergies between the two that English National Opera’s artistic director Daniel Kramer exploits in his staged version of the work. This in itself is an achievement because, while a number of Oratorios, Passions and Requiems have been staged, the War Requiem may not seem like a work that could be further enhanced given its beauty, intensity and sheer emotional power already. In fact, there would seem to be a risk that the extra layers introduced made the piece feel overblown or crass, but that pitfall is avoided here in what proves to be quite a measured affair.

One of the hooks for the presentation is a book of 1924 by conscientious objector Ernst Friedrich entitled Krieg dem Kriege! (War Against War!). It includes over 180 photographs that reveal what war is really like, with the belief that if the horrors could be made vivid enough for people they would finally appreciate the total insanity of fighting. In this way, towards the beginning of the evening pages of the book are shown on huge screens, at first revealing a seemingly innocent love for toy soldiers, but then showing how these nurture more belligerent ambitions in people.

The chorus, comprising the ENO Chorus, the Porgy and Bess Ensemble (also performing in the eponymous work) and the Finchley Children’s Music Group, wear muted colours and symbolise the victims of war as they swirl in huddled masses, lie dead on the ground or kneel over lost loved ones. In most concert performances the children’s chorus is placed offstage, perhaps high up in a gallery, but here the youngsters are on stage for the majority of the time that they sing.

The presentation includes video designs by Wolfgang Tillmans so that the Dies Irae presents the remaining ‘courtyard’ of the old ruined Coventry Cathedral, where close-ups of stones reveal lichen growing and hence signify new life. In this way, although the War Requiem was always designed to see the traditional Latin Mass interact with Owen’s poetry, this staging appropriates even more of the former to address the subject of war. For example, here in Dies Irae the staging suggests that the ‘ashes’ and ‘trembling’ are referring more to the consequences of war than to what will happen on the Day of Judgment. The staging does, however, help to draw out the synergies so that we instantly connect the chant of ‘Requiescant in pace’ (Let them rest in peace) with the soldiers’ cry of ‘Let us sleep now’. This may, however, be because surtitles, which do not tend to feature in concert performances, make it easier to grasp them by providing the Latin and English words alongside each other.

As a rule, the ‘illustrations’ to the poetry work better than those to the traditional Mass, because there is more scope to act out a ‘narrative’ and less need to resort to more generalised ideas. In this way, in ‘Out there, we’ve walked quite friendly up to death’ tenor David Butt Philip and baritone Roderick Williams as soldiers skip over the sleeping bodies of their platoon, waking them as they go. Similarly, ‘So Abram rose, and clave the wood’ involves relating a story, and here that idea is emphasised by having everyone else sitting around listening.

The overall success of the staging, however, derives from it being kept appropriately measured. So when David Butt Philip begins to sing in the Agnus Dei everyone else is simply still allowing him, with his expansive and impassioned tenor, to dominate the moment as he would in a concert performance, only with the people surrounding him contributing to the overall atmosphere. Then as the scene progresses all of the children march off to war, with Butt Philip staring one in the face as he sings, showing how even minors are being sucked into the brutal machine.

Another example of the staging actually complementing the work by being so quiet is when the immensely powerful Libera Me is met by comparative stillness as two child soldiers slowly advance towards each other with knives. This provides an appropriate lead into the final poem Strange Meeting in which one soldier meets his dead former rival, and here allows Williams actually to look Butt Philip in the face as he sings ‘I am the enemy you killed, my friend’.

Music director Martyn Brabbins conducts superbly, while soprano Emma Bell, who is half Angel of Death, half grieving mother, tenor David Butt Philip and baritone Roderick Williams all produce some immensely moving singing. It is impossible to feel some of the subtleties in the expressions of ‘Confutatis maledictis’ or ‘Libera me, Domine’ that can be the hallmark of a good concert performance, but this is not because the choruses here are any less accomplished, but rather that in such a staging our minds are automatically drawn to other things. Nevertheless, as English National Opera’s own contribution to the commemoration events marking the centenary of the end of the First World War, Daniel Kramer’s War Requiem proves a highly fitting one. 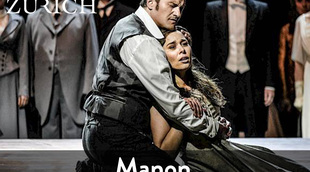