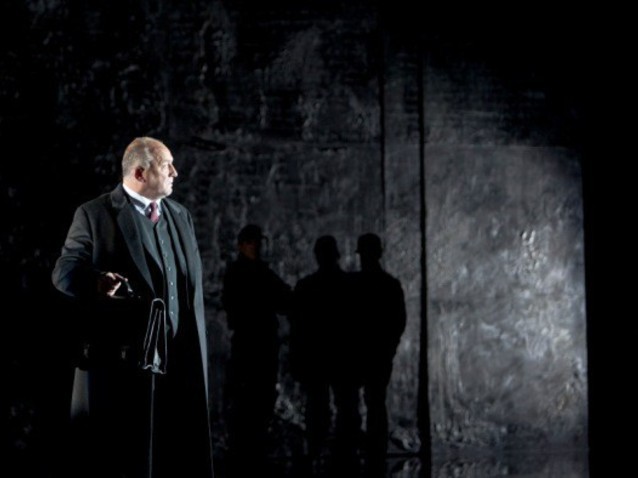 We were expecting an extraordinary show. First, there was the symbolic choice of 3 October, the day of Germany’s reunification. Then the reuniting of two giants of Berlin’s musical scene, Harry Kupfer as stage director and Daniel Barenboim as musical director. And then there is the opera itself, Fidelio, an apologia for freedom and faithfulness, perfect for evoking the isolation of the former Eastern Bloc.

The promise of a great opera moment is realised in the first bars of the overture. Daniel Barenboim displays incredible instrumental blendings in complete silence. The orchestra of the Staatskapelle, which just last week was still playing (poorly) Puccini’s Tosca, is not immediately recognisable. With his almost Wagnerian reading, the conductor reveals the motifs in their orchestral fabric, then lets them swell with irrepressible grandeur. We get the feeling that this Fidelio will be, first and foremost, Barenboim’s. 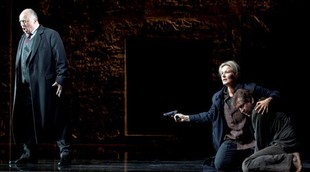 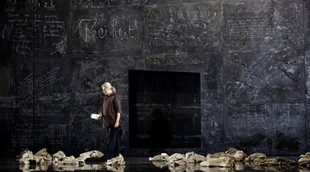 And then there is the shock of the first image: some supernumeraries appear before a painting of the Vienna Konzertverein, which suddenly falls down, suggesting a prison wall where we can just make out the words “Freedom” and “Peace”. But instead of the chalk-covered blackboard from Gluck’s Alceste by Olivier Py, the memory awakened here is rather of Janacek’s From the House of the Dead by Patrice Chéreau. There is the same concern for stylising everyday life in prison, with few set elements and highly natural acting. The option not to use any surtitles (which for non-Germanists could be problematic) returns Beethoven’s opera to its theatrical origins, and the spoken dialogue, cut in order to promote understanding, is fortunately magnificently eloquent.

Through it all, Kupfer uses very simple, strong ideas. The former director of Berlin’s Komische Oper clearly has a great understanding of space, whether in group scenes (magnificent moment when the prisoners see the sun again), with subtle references to the latest headlines (guards dressed as Neo-Nazis) or the highlighting of the solo numbers. Of course he does not shy away from the work’s oratorio dimension; there is even a certain stasis that slips in at the end of the first act, but the German stage director creates striking images and manages to maintain the immediacy of breathless intrigue. This performance triumphs by following Beethoven’s wishes. By placing a piano decorated with a bust of the great Ludwig in the prison, Kupfer suggests, loudly and proudly, that art can triumph over injustice. In the final chorus, the prison even becomes a concert hall, and the singers face the audience, holding the score, realising the composer’s dream of a music-based political utopia.

This relatively undramatic option is compensated by wonderfully fluid directing of the actors. Marzelline and Jaquino are played by expressive young singers, Evelin Novak and Florian Hoffmann. While the final appearance of Roman Trekel as Don Fernando is disappointing, and we also have some reservations about the far too muscular performance by Andreas Schager as Florestan, who was the winner on the applause meter when the singers took their bows, the extraordinary cohesion of the troupe, including the Staatsoper choruses, was noteworthy. With this level of commitment, it would be churlish not to acknowledge the true value of the outrageous and impersonal Don Pizarro played by the great bass-baritone Falk Struckmann, and we prefer to focus on the two great triumphs of the evening: Camilla Nylund, who finds her mark in Leonore in an intense and vocally solid second act (super “Tot’ erst sein Weib”) and especially in Matti Salminen’s Rocco. At 71, the legendary Finnish bass’s voice is not what it used to be in terms of volume, but the character’s humanity is very moving, in tune with Kupfer’s staging which sees the prison guard, who does not hesitate to refuse evil orders, as the opera’s main role.

Magnificent symbol: leaving the pit as the singers take their bows, the entire Staatskapelle orchestra reappears on stage behind its musical director. It is indeed the humanism of the Argentine-Israeli musician that makes this straightforward and moving performance a majestic one. Its deep, solemn beat signs hymns to the human race that elevate the spirit. As you will have understood by now, this Fidelio is a huge success.