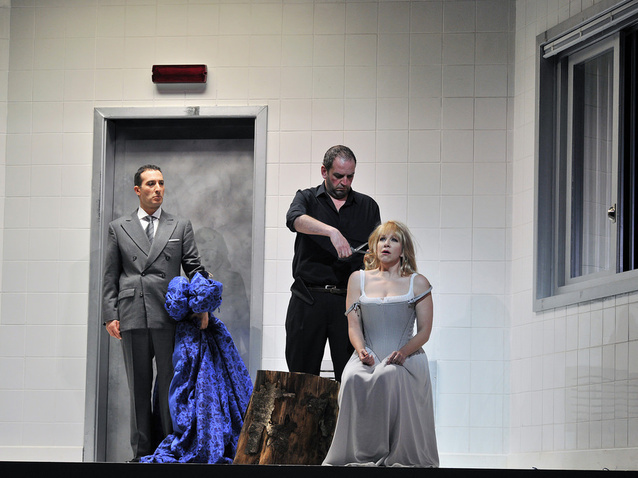 The answer to this question depends (as it usually does, and especially when it comes to a ‘belcanto’ opera) on the particular singer.  Barcelona has always seen, until now, the soprano version, the best known, but Malibran’s  voice was certainly not the kind of Ronzi de Begnis’ (furthermore, the latter had sung at Naples Buondelmonte  while Malibran was the first Stuarda at Milano when the opera appeared for the first time with its actual title).

Joyce DiDonato is not, of course, neither Caballé nor Gruberova, but as it is extremely difficult to think of another mezzo able to sing some of the eleven (!) performances in less than three weeks, we had both versions, with Majella Cullagh leading the second cast. 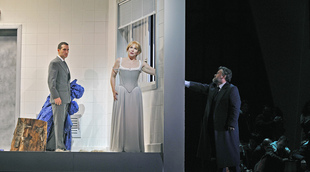 The soprano version would seem to be anybody’s obvious first choice, and Cullagh is a fine singer (Opera Rara has certainly made a mistake opting for other sopranos in its recent recordings) whether you think of technique, style or even articulation; you can also add her sense for phrasing and a commanding stage personality. But… Di Donato is almost miraculous: she is capable of lightening her timbre in the high notes and the ‘messe di voce’ while using even the chest (without any exaggeration) for the low ones. Her trills and embellishments are of the highest quality, the intensity of her recitatives incredible, her Italian spelling crystal-clear. ‘O nube che lieve’(the aria for her entry on stage)  and the whole final scene (which Donizetti called “aria del supplizio”) created a sort of religious silence in the audience.  There were, of course, some fans who would have liked  the ‘cabalette’ to end on an endless  high note, but that was not only impossible considering the artist’s register but also because of her approach of the character.  From a purely personal point of view, I found most moving her  truly unforgettable beginning of the duet with Talbot ‘Quando di luce rosea’.

Javier Camarena proved that a demanding and not much rewarding role (Leicester) is not an obstacle for an outstanding singer. He also had to replace at last minute a sick colleague in the second cast and consequently sang for two consecutive evenings. Yet, he showed the same power and commitment (and obtained a most deserved triumph).

The question concerning the kind of voice for Elisabetta is quite the same as Maria’s case. If the last is a mezzo, it would be better to have a soprano or a Falcon for her rival. Silvia Tro Santafé sings well but her top notes are strained and for the rest of the part, even if she is a fine artist and musician, you could tell that this kind of repertoire is not (or not yet) the one that best suits her. By contrast, Marianna Pizzolato, in a sort of ‘ Bette Davis’ performance, even if her eyes were riveted on the baton, seemed more fit to the part. 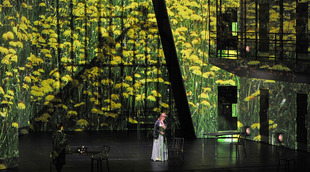 Michele Pertusi  is today perhaps too much of a bass for Talbot (a role he had sung previously here---in 1991!) but it was a privilege to have a singer of his class who makes a sense of every phrase, even the trivial ones.  As for Mirco Palazzi, he was in good voice but without the mastery of his colleague.

For the ‘bad guy’ (Cecil) the Liceu chose the excellent Vito Priante and the too vehement (both in vocal delivery and in acting) Àlex Sanmartí. Anna Tobella sang well Anna Kennedy’s few phrases.

The choir (led by Peter Burian) was not less than perfect and deserved the applause after the big scene close to the opera’s ending . The orchestra, sometimes a bit too loud, most notably in the famous prayer of the last act, was in good shape, thanks to a Maurizio Benini in one of his best nights.

Alas, the production (already seen in London and going in the future to Paris and Warsaw) by Patrice Caurier and Moshe Leiser was in the first place incoherent (both queens were dressed as they should but the rest of characters and choir wore 20th century costumes), and there were bizarre details (almost all the characters helped themselves to a Scotch when they didn’t know what to do next- the only one to have a good reason for it being the executioner). If the moment of the execution was meant to become a strong allegation against the death penalty, it was so awkward that the goal was missed.