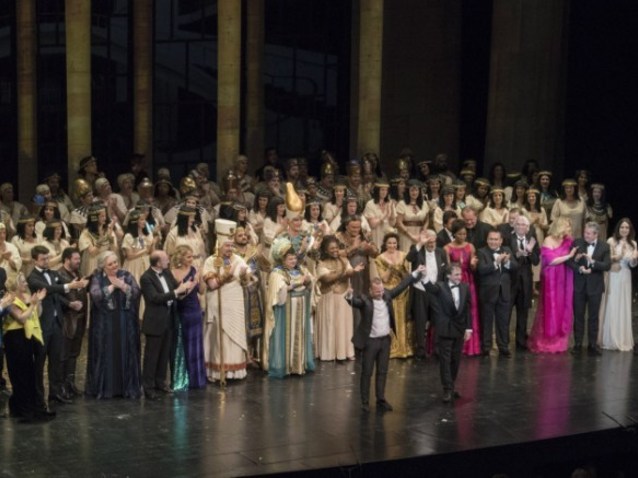 On May 7th, the Metropolitan Opera threw a special gala to celebrate 50 years at the “new Met” in Lincoln Center. The design of the new Met has been debated and criticized since its construction, but one thing is certain: it has been an artistic home to many of the world’s greatest singers. They were there in full force and full voice on Sunday for this nostalgic celebration.

In an unusual and brilliant move for a gala, the production was fully staged using projections by 59 Productions and sets by Julian Crouch. Scenery drew on the aesthetic of past Met productions of the relevant opera, while also incorporating aspects of the Met’s distinctive architecture.  Especially excellent were the playfully “drawn” backdrop and legs for Die Zauberflöte (inspired by the Chagall and Hockney productions) and the garret cut-away for La Bohème, which was so detailed it was difficult to tell the difference between the projected elements and the solid set pieces. The set choices were mostly traditional (for example, Zeffirelli’s Traviata over Decker’s), which was beautiful but backward-looking in a gala that should celebrate not just the past but also the future. It also led to some awkward false steps, such as the inappropriate yellowface (complete with “slanted eye” makeup and stylized gestures) Netrebko donned for Butterfly.

The musical selections mostly drew from the core repertoire, but the most exciting pieces were the rare gems. Isabel Leonard, Ben Bliss, and Dwayne Croft sang a shimmering trio from Adès’ The Tempest. In a strange but forceful scene from I Lombardi, Angela Meade, Michael Fabiano, and Günther Groissböck overcame a talkative audience to fill the house with their rich sound. Joyce DiDonato wowed with endless coloratura fireworks as Semiramide, and René Pape gave a devastatingly expressive performance of madness and despair and Boris Godunov. The Les Troyens duet between Susan Graham and Matthew Polenzani was delightful for their precise, perfectly matched voices.

Not that the standards were boring. Vittorio Grigolo acted his heart out as both Roméo and Cavaradossi. Javier Camarena proved his superhuman abilities by making “Ah! Mes amis” sound easy. Elīna Garança delivered a smooth and seductive rendition of “Mon cœur s’ouvre à ta voix”. Pretty Yende and Maruisz Kwiecien were simply adorable (and vocally agile) in their Don Pasquale duet. And Anna Netrebko captivated as Lady Macbeth, singing her ambitious plots in a dark and earthy tone.

The most moving—and heavily applauded—moment was Dmitri Hvorostovsky’s surprise return to the Met to sing “Cortigiani, vil razza dannata”. He has been undergoing treatment for a brain tumor, which has prevented his appearance in staged opera productions recently. He quickly proved that he has retained all of his charisma and vocal elegance. It was surprising that his was the only last-minute addition. The heavy emphasis on today’s singers in the program led some to speculate that surprise guests might include the old guard of great singers (such as Leontyne Price and Martina Arroyo), for emcee bits if not full arias. That did not happen.

Three conductors took turns at the podium for the five hours of music. Each drew superb sound from the Metropolitan Opera Orchestra. Yannick Nézet-Séguin provided excitement, Marco Armiliato smoothness, and James Levine unity of vision. The conductors and the orchestra proved their versatility in everything from Handel to Verdi to Adès. The Metropolitan Opera Chorus sounded huge and precise, particularly in the tonally slippery “From Alexandria, this is the news” (from Barber’s Antony and Cleopatra, which opened the Met season 50 years ago) and the glorious, festive entrance of the guests from Tannhäuser.

Scattered among the operatic extracts were videos telling the story of the new Met: Leontyne Price discussing the honor of opening it, archival footage of the groundbreaking, Marc Chagall on his murals, and James Levine on conducting. Most amusing was the story of how the distinctive Sputnik chandeliers were the accidental result of splattered paint. The introductory video (silent, played during the overture from West Side Story) emphasized how Lincoln Center fits into the city of New York. In a clever bit of staging, a cutout of the New York skyline transformed into the Lincoln Center fountain. For all these high-tech marvels, the celebration ended traditionally: as the soloists and chorus finished the act II finale from Aida, an array of glitter cannons shot silver and gold confetti over the stage.