The Fiery Angel at the Komische Oper, Berlin 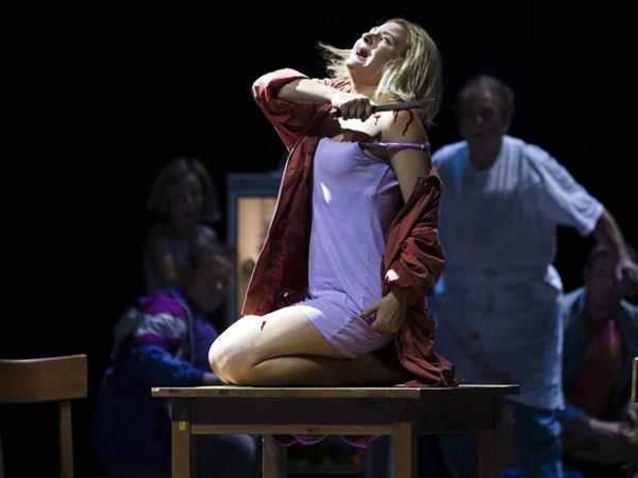 When Sergej Prokofjew’s opera „Fiery Angel“ was first performed in 1955 Russian or better Soviet music was still governed by the strict rules of socialist realism. Subsequently Prokofjew’s piece exposes  both strong anticlerical and antibourgeois sentiments : A woman, Renate, has fallen in love with an angel when she was  a girl and since then she is trying to find this angel again. In her quest she is accompanied by Rupprecht, a young man who is as obsessed by Renate as Renate is obsessed by the memory of the angel.

This gives Prokofjew the chance to ridicule religious feeling and the romantic concept of „love“. Fortunately producer Benedict Andrews from Australia ignores blatant propaganda aspects but focuses on Renate’s personality and development raising (but not answering) the question whether she was abused in her childhood by somebody she took for an angel. This is not an easy approach since Prokofjew’s  music does not intend to be „psychological“ but is often aggressiv and grotesque while lyric moments are rare. Nevertheless the evening was a great success.

Part of it is the result of Andrews‘ idea to multiply Renata by putting a number of younger versions of Renate on stage all dressed like her but of different ages. The production which transforms the story from Germany in the late middle ages to modern times also benefits from a very mobile rotating stage which allows for rapid changes of scenery and decoration. That goes well with the often fast music and avoids long interruptions. Since in Berlin the opera is performed without pause the whole performance lasts only about two hours which pass rather quickly.

A second reason for success is instrumental. „The Fiery Angel“ is a showpiece of billiant orchestration and strong rhythms. This gives the orchestra of Komische Oper conducted by Musical Director of Komische Oper  Henri Nánási  the chance to demonstrate convincingly its many qualities.

Finally, the singers are simply excellent. Russian soprano Svetlana Sozdateleva has a big, dramatic voice but can be intense in her quiet moments, too, when she is suffering from or reflecting about her desperate passion for the mysterious angel. Her lover Rupprecht, sung by baritono Evez Abdulla from Azerbaijan is equally convincing  giving his somewhat strange part (a man helping the woman he loves to find his competitor) dignity and virility. The rest of the cast is very good, too. Specially the Russian singer of Mephistopheles, Dmitry Golovnin, and Jens Larsen from the Komische Opera team as Inquisitor are worth mentioning.

Apparently importing so many singer from the area of the former Soviet Union has ist price because the opera is sung in Russian language while usually any opera performed in Komische Oper is sung in German. The surprisingly young  and enthusiatic audience enjoyed the evening nevertheless, thus rewarding Komische Oper for its courage to put on stage a rarely played but definitely interesting example of Soviet opera.