Stefan Vinke and Petra Lang in Lohengrin at the Wiener Staatsoper 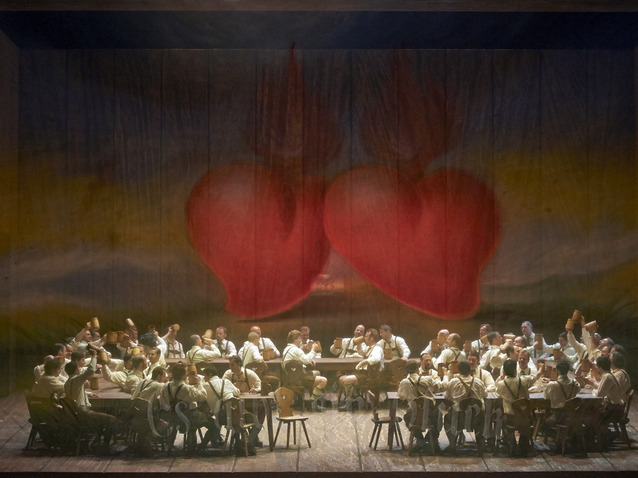 'There is happiness' and two burning hearts in a soft landscape as a big painting decorates the transparent curtain, as part of this new interpretation of the opera by young Richard Wagner. This reference to the libretto by the master is designed by Director Andreas Homoki who sets the legend of this divine hero and his swan in a very traditional Bavarian environment. The Munich Hofbräuhaus seems to be the model of the stage design and so does the traditional Bavarian costums with leather trouser and woolen stockings. Brabant is transfered from the Schelde to the riverside of the Isar. The concept is immaculate but lacks of the references made by Richard Wagner. The direction stays close to a bizarre satire when Ortrud or Telramund hide under the tables or when Ortrud plays football with flower bouquets, and it gets a sour taste when the knights gather around the tables feasting with beer and cheering on the 'Deutschtum'. One of the rare highlights of this production is the final farewell of Lohengrin and his conversion, as well as the return of Gottfried. 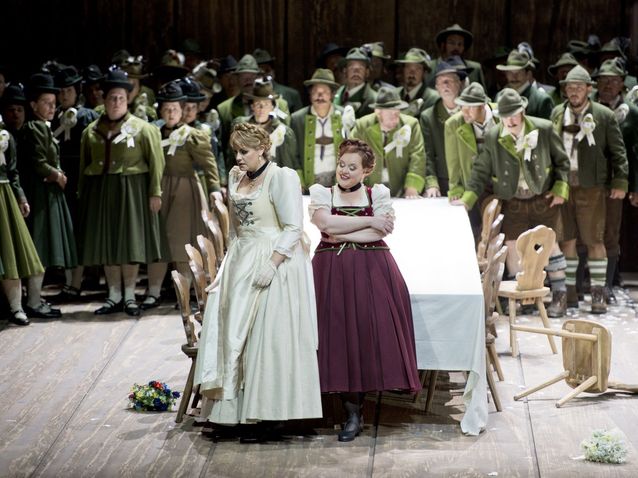 But luckily the musical realisation of the evening develops to a real highlight and a glorious demonstration of the mastership of the Viennese Philharmonic Orchestra. Yannick Nezet Seguin, the designated musical director of the Metropolitan opera, achieves to raise the orchestra to full concentration and a perfect harmonious collaboration. He persuades the strings to savor the romantic warm and long melodic arcs. In general, he has decided for a rather slow but very sensible and emotional style, bringing the music closer to the late romantic period of Richard Wagner. After some small irregularities at the beginning, strings and winds unify in a perfect dialog and joint sound. They form a wide sound carpet for the singers to step on. The voices are rarely covered or pushed and so, once again, every word is clear and extraordinary well understandable.

Stefan Vinke has replaced ill Klaus Florian Vogt as Lohengrin and gives his debut at the Vienna State Opera. His voice resembles his replacement, bright with a silver glitter, less lyric but with considerable room for crescendi. Due to his engagement at last minute, he seemed a little bit lost on stage in this odd direction. Ricarda Merbeth joins him as Elsa, blond and corpulent in her Dirndl, the traditional ladies garment, she sometimes lacks of a gentle play and her voice is not always lyrical, but she masters all the critical parts, gentle and safe. Günther Groissböck returns as Heinrich der Vogler, impressive in his presence on stage and with his fine timbre, his bass can show drama but less sonor volume. In Bayreuth, Petra Lang has received stunning critics for her fine Isolde, shortly afterwards she returns here on stage as a dramatic excessive Ortrud. Her Mezzo is sharp, colorful and remains round in height and depth. Tomasz Konieczny as her beaten and willing-less husband is as good as his counterpart and his fight for honor and might is convincing. Boaz Daniel is a noble Heerufer and rather serious next to the countryside atmosphere by the choir in their costumes, but with a fabulous preparation and presence on stage. There is a lot of big mass scenes which all contribute to the extraordinary musical experience of the evening.
The final applause is full of 'Bravi' with standing ovations for the soloists, conductor and orchestra.