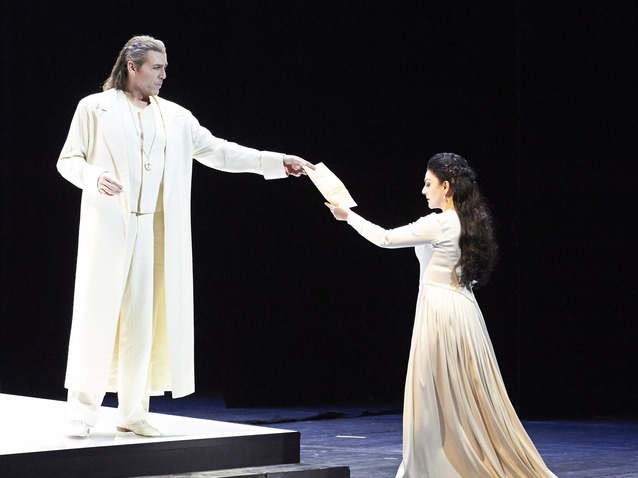 This reprise of the well acclaimed production of Peter Stein and Stefan Mayer shows several role debutes on the stage of the Viennese State Opera. Joseph Calleja gives his warm with a full Italien timbre equipped tenor to Gabriele Adorno. Lacking lively emotional play on stage he conquers the audience with his voice next to Tamar Iveri as a colourless Amelia and Thomas Hampson dominating the evening in the title role. His Simon is honorful, dignified, caring showing affection for his rediscovered daughter and emotion for her selfless love. Ferruccio Furlanetto is his heartless counterpart Fiesco full of bitterness and finally pathetic forgiving. The final affection of the two old men is moving the feelings.
Conductor Alain Altinoglu develops a very fine transparent Verdi sound avoiding husteld tempi and colume changes. More he cares for the singers and their feelings and masters a fruitful melting of voices and instruments. Including the touched audience.