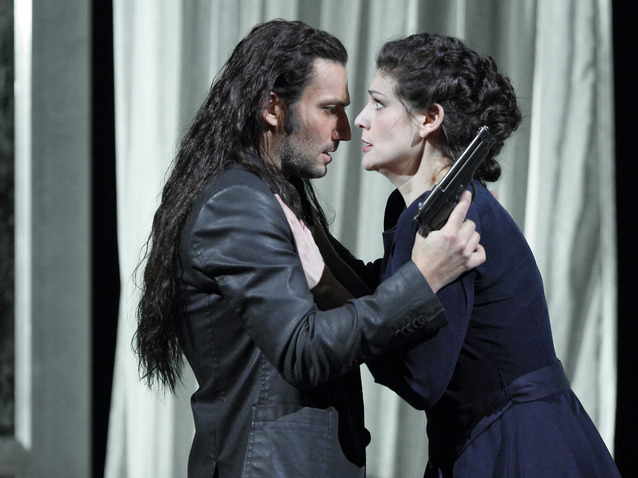 Just before the end of the Verdi year 2013 the Bavarian State Opera presents another new production  of one of his major works - La Forza del Destino - and new edition of the German dream team Anja Hateros and Jonas Kaufmann. The Austrian Martin Kusej, currently head of the Munich Residenztheatre next to the opera, is the director..He is famous for brilliant profound interpretations but not always easy to digest. It is impressive how he approaches this very complicated tragical story of hate and love, faith and moral, destiny and fatality. Battlefields and the glorification of war dominates the environment of the libretto by Francesco Maria Piave. The cruelties, squalidness and hopelessness of war and men in war is a concern to Martin Kusej. He sets the story in modern times and brings this vividly in front of our eyes with reference to 9/11 or the tortures of Abu Ghuraib in Iraq. Martin Zehetgruber creates clever expressive images on stage. Effectful the perspective into the Iraqui prison or the hermitage of Leonore being flooded by white crosses as of war cemeteries. The oppressive tragedy is fortified by the coolness, desperateness and soberness on stage. Extended parts of the telling happen in a concrete bunker like ambience decorated in DDR communist style. Martin Kusej starts off to tell the story by staging already during the ouverture. As the music presents all the musical themes (one of Verdi rare contributions to Wagners Leitmotiv) he introduces all the acting characters participating on a final supper at the house of the Marchese Calatrava. In an interview he refered to his concept as of telling the story as a dream or better nightmare of Leonore caused by the shock of  the fatal death of her father.Nobody could dream during this evening full of actions and emotions and the audience was witness of the power of voices. Anja Hateros and Jonas Kaufmann are the darlings of the Munich audience but they do fit wonderfully together by appearance and singing. Anja Hateros internalises the sorrow and guilt feeling of Leonore and passes off in despair for salvation. Her voice accompanies her crusade of feelings pure and clear climbing up breathtaking heights with ease and silver sound. Jonas Kaufmann´s debut as Alvaro was immaculate and successful. He fits into the character mutating from the rebel to the moral hero. He pulls out all his stops when he brings in all his passion in the duetts with Leonore but even more with his fanatic opponent Carlo de Varga sung by Ludovic Tessier. He is coequal in his performance with his strong voice and warm timbre. Vitalij Kowaljow dies fast as Marchese Calatrave but returns even more convincingly as Padre Giordiano. Nadia Krasteva is the impudent frivolous Preziosilla sexy and safe in her singing.

Asher Fisch conducts the well prepared Bavarian State Orchestra clever and well balanced in volume and sound. He accompagnies attentive remaining in constant contact with the singers. The instrumentalists unify harmoniously and dilligently and show their power of embedding musical sound in the overture and intermezzi to soften the cruelity on stage. Strong and active applause for the singers and conductor, the reception of the director was lukewarm but this certainly is a worthily finish of the Verdi jubilee.