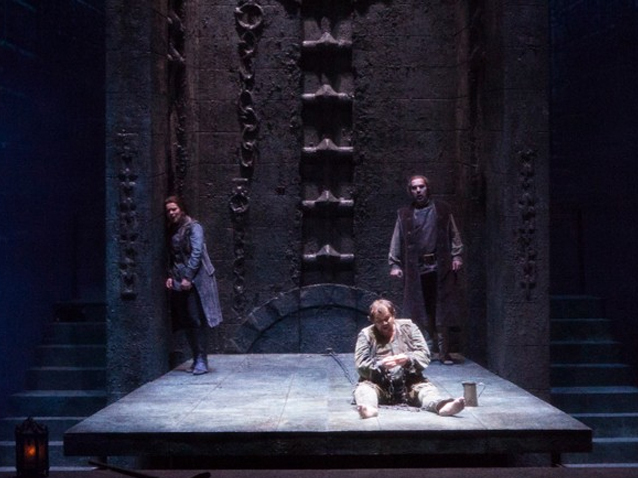 The Maggio Musicale Fiorentino belongs to the most prestigious music Festivals in Italy with a broad variety of spectacles consisting of opera, concerts, recitals, films and accompanying venues. The international reputable maestro Zubin Metha is the musical director and a strong supporter of the troublesome Italian culture scene as well as in Valencia in Spain, where this year production of Ludwig Van Beethoven's Fidelio comes from.

Florentine director Pier'Alli has created his interpretation of this grand oeuvre of rebellion and liberation. For him it is a two level composition, a continuation of Italian style of opera with disguise, intrigue and confusion around love but in a second level a metaphysis and psychological and political level within the mind of Florestan sacrifying and accepting his fate as well as womans role in liberation. His creation -including direction, scene, light  and costumes  - is not really a convincing scheme, but the transfer of levels between act I and II with the entrance to the metaphysical tunnel of Florestan mind and prison is the best part. A clever videoinstallation captures the audience and brings them in a mystic cosmic drive along a tunnel into the close cell of Florestans mind and prison. Back in liberty under the blue sunny sky we jump back alike to a painting of a dutch master of the 18th century.

Zubin Metha contributes his interpretation of the plot and composers intention in the orchestra pit. It is pathetique and emotional, clear classical mixed with romantique enriched sound volume and orchestral amplitude. It is personal, expressive, mourning and suffering, all in one.  His inplementation of the third Leonore overture gets an impulsive adoration of tragic fate and redemption, highly appreciated by the audience.
On stage Ausrine Stundyte plays well young Fidelio but puts much pressure on her voice resulting sharp heights and unclear intonation resembling highly dramatic. Burkhard Fritz is a safe Florestan not risking too much emphasis on expression. Manfred Humm is a fine aged and human Rocco with a warm sonor bass. Eike Wilm Schulte appears unsecure and helpless with the instructions on stage in his role as Don Fernando. His aged voice is unflexible and instable. Evgeny Nikitin is his strong and determined counterpart Don Pizarro. His presentation is lively and his bass baritono convincing. Anna Virovlansky as Marzelline and Karl Michael Ebner as Jacopo are fresh young and distinctive.
There is a very warm and hearty applause for all especially for Maestro Zubin Metha. This is also a remuneration of the followers of the festivals for his long time contribution and fidelity.