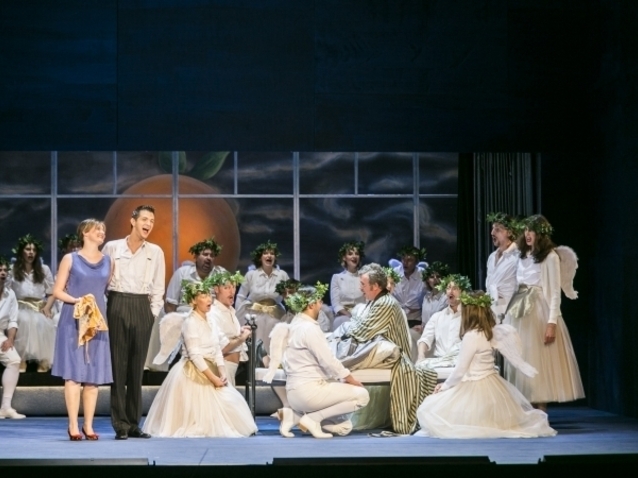 Big interest for the first opera production of Mr.Koepplinger, the new head of Munich´s second opera house the beloved Gaertnerplatztheater, under the direction of Brigitte Fassbaender, famous singer and highly regarded manager of the Strauss festival in Garmisch this Don Pasquale is a very fine elaboration of an old and traditional story.
Mrs Fassbaender´s subtile characterization of each character and the cleverly transformation into the 20thcentury is very entertaining and never exaggerating. Don Pasquale is a lively elder playboy in colourful dresses. Well known Franz Hawlata brings into his interpretation of the role in addition Bavarian charme and livestyle... Dr. Malatesta is a smart young dentist, Mathais Hausmann shows his warm baritone and acting talent.  Stunning  Anja Nina Bahrmann and Bogdan Mihai as Norina and Ernesto. These two singers have extraordinary voices and bring young fresh and convincing presentation on stage. Bahrmann's soprano shows no difficulties in her part, warm and soft in the heights, Mihai s tenor is powerful, warm and silver in his timbre. Lovely the choir s integration into the scene  as chatting and curious personnel accompanying the cast.

Italian born Marco Comin is the new chief conductor of the Gaertnerplatz theater. Very active and pushy in his conducting it lacks romantic orchestral sound. Heavy fortes fill the house reducing the space for the singers and their interpretation.