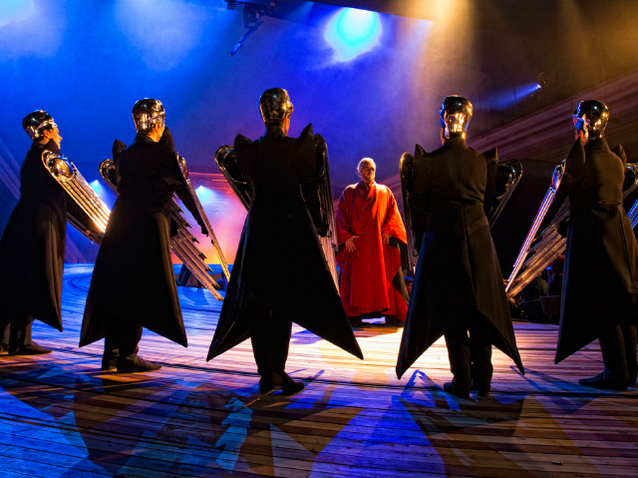 Everything is dark, light is dimmed, the Wanderer creeps around checking Notung in the trunk, Siegmund settles down exhausted and Sieglinde roams lost around. Suddenly a metal noise disrupts the mystical music of the prelude, Notung fell off the trunk and lies well placed on stage,  just in front of the shocked eyes of the audience. But this misfortune does not really harm the intense evening to come.

Christopher Ventris conquers with his powerful warm tenor the love of his hostess Sieglinde. The american soprano Catherine Naglestad has a very dramatic voice but lacks expression...as her play on stage which accounts to the direction. Is she undecided between this young stranger or her husband? Kurt Rydl´s voice remains flat and  without volume. The first act shows a lot of aimless marching around on the great and empty stage which has been built over the orchestra pit, right into the audience. It is a broad wooden half cercle, on the right side of the stage and the orchestra is posted in the centre of the cercle. So everything is again just right in front of the awaken and thrilled audience. This is not without effect and denseness on the following dispute between Wotan and his wife Fricka. Thomas Johannes Mayer appears as the stately Godfather but has his troubles to encounter Doris Soffel as his wife Fricka. Her voice dries with age and gets sharp and metalic. This supports her appearence on stage as the desperate highly emotional betrayed Goddess. Catherine Foster seems levitating with her clear and fresh soprano. Clear and light are her Valkyrie calls, tireless her singing. It is the intimate moment of her farewell and expression of love and admiration between her and her father which is the most touching part of this evening. Beautifully sung and sensibly joint by the orchestra. Once again Hartmut Haenchen brings a fine well balanced musical interpretation. There is a constant touching flow in the music, melodic and moving, even if his tempi are slow. We have seen a lot of open fire on stage during the performances of  this Ring, but there is no fire at the end and Brünnhilde sleeps on the simple empty stage, spotted by a light show - and moving technical effects. Unprotected she is waiting for her heroe and the delighted audience too.

Die Walküre at the Nededrlandse Opera