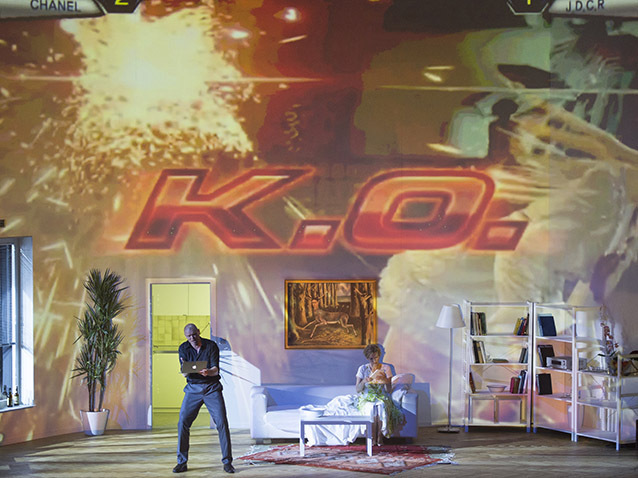 The title is misleading as it is not mentioned to be a historical drama. The libretto of this opera is taken from surrealistic texts by Antonin Artaud dating from 1933, and are enriched by lyrics by Octavio Paz. It is actually a musical drama without a narrative, even it is linked to the historical fact of the conquest of America, but the composer's intention is more to accuse our civilisation, social organisation, capitalism, war and after all the central relation between man and woman. It is complex and following the textfragments does not make sense.

The story is told in the music. We meet  two characters, Montezuma sung by a soprano and Cortez by a bariton to mirror the principle male / female. The male concept is strenghtened by two speakers and the female one by a high soprano and a dark alt.
The evening opens with a continous, very distant sound of percussion issuing from a non localizable source that fills the whole space. There is fainting light. The sound may cause the feeling of sacrificing dances putting people to trance. Montezuma, most brilliantly sung by Angela Denoke expects and prepares like a housewife the visit of Cortez, whom she seems to specially care of. And there he is the macho conqueror sung by Bo Skovhus. Next to the spheric music the male voice does not differ as much as the sharp soprano does. Cortez conquers Montezuma and we experience a mass love scene accompanied by the Spanish soldiers represented by the choir, cleverly introduced by the director Peter Konwitschny. They sit dispersed all over in the audience. They start singing while sitting on their seats and later stream on stage to celebrate an orgy party. Montezuma offers gold, represented by five models put in a golden bodysuit. It works and the gold is taken away in a red sportscar by the hero Cortez. Montezuma has got pregnant and in the next image we participate to the baby's birth which pops up to be a selection of Apple products, another hint to the destruction of society. A video refers to the use of those products and their dominating effect on mankind. Next picture shows Montezuma's death in her marriage dress. A puppet copy of her remaining on stage to become the object of destruction by Cortez.
The longer the evening develops the more it gets lunatic and exaggerated, refering to the continous process of destruction in our society. Peter Konwitschny and Johannes Leiacker, the stage designers, bring a lot of ideas, details and action on stage.  The direction actually dominates the perception and creates a bigger story than actually existing by expressing every musical detail in an image.

Wolfgang Rihms music is fine and very elaborated, avoids dramatic highlights but remains surrealistic as the text, pointless like the story, but rhythmicly moving forward and evenly growing into a wide carpet of harmonic instrumental sounds. Mainly based on a variety of percussions, the instrumentalisation is very colourful and sharply differs to the dramatic singing. Susanna Andersson has a very high, clear and sharp soprano and mixes fine with the voluminous dark alto of Marie Ange Todorovitch. The conductor Ingo Metzmacher is kept very busy in keeping all musicians in line, having several orchestral outlets in the house, a choir placed in the audience and a vast stage. But he is an expert of contemporary music and actually the conductor of the world premiere in Hamburg 1992. For the final both the dead Montezuma and Cortez come back to pronounce the lonely death, inexhaustible love emanating death. The music glides into silence and the light faints to darkness as the whole story does.

The audience of the soldout theater applauds heartily and is conquered by the athmospheric space-like music and the descriptive elaborated baroque like interpretation. Contemporary music and in particular opera find increasingly admirers and can enlargen the billboard of our theaters.