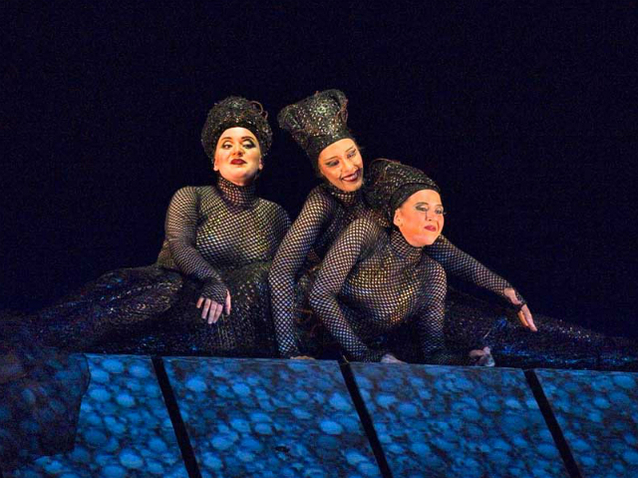 Eighteen years ago, the first complete direction of Richard Wagner's Ring des Nibelungen in the Netherlands took place. It was then a highly regarded and rewarded project by the Libanese director Pierre Audi - and his stage designer George Tsypin - for the Netherlands Opera House (Nederlanse Opera) in Amsterdam. The direction relies on the concept of bringing the story close to the audience. It is the last time that the cycle is performed, and more than 165 000 people have seen it. Eighty trucks are necessary to transport the gigantic scenery. First present in Rheingold, we can see a huge transparent platform hanging over the orchestra, a catwalk being installed between the pit and the first rows of the stalls. This creates an very big effect of closeness and excitement, to be so close to the Nibelungs, Giants and Gods. The Rhinemaidens swim on the platform, accompanied by a light show which creates water effects. The horny Alberich joinst hem. Finally he gets hold of the gold in a glass cube and rolls it off the stage, with a hearty laugh. The gods in ancient Greek costumes reside on another steep platform, so the giants can grow in the perspective. The Nibelungs look like telepuppies strawling around. The story of greed, power, fight and revenge develops smoothly and in a natural flow on stage. Being so close takes big effect and is touching. It is frigthening when Werner von Mechelen recites Alberich's oath staring in the audience eyes, just few meters away, or when Mime sung by Wolfgang Ablinger Sperrhacke celebrates the imprisonment of Alberich.

The cast is well selected for this last cycle. Johannes Thomas Mayer is an aristrocratic insecure Godfather, powerfully enlightened by Marina Prudenskaja as Erda, or accompanied by his scary wife Fricka, sung by Doris Soffel. It is Stefan Margita who brings alive the devious Loge, who gets a dominant exposure to move the fate of the Gods. We feel the same enthousiasm for Hartmut Haenchen's conducting : his work is fine well figurated and balanced. He is not into buildind voluminous, forte and extatic sound. His constant presence very next to the stage and audience leads to a very intimate and intense feeling of music and play. People are thrilled and reward everybody with standing ovations, but also with melancholy for it is the dawn of this intelligent and just beautiful production of Richard Wagner's monumental masterpiece.

Das Rheingold at the Nederlandse Opera