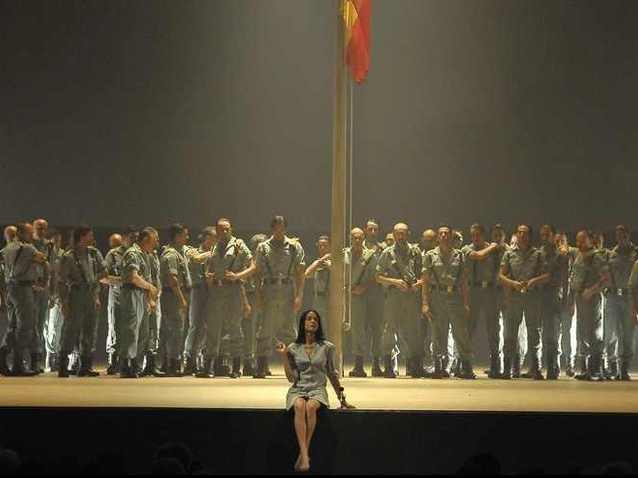 Seville on visit to Venice. This new production of Carmen at the Teatro la Fenice has a lot of spanish blood transplanted to Italy by Catalan director Calixto Beito. It is emotional, erotic, brutal and realistic. We have very intimate scenes as well as big mass demonstrations. The action is moving and the listener or spectator becomes a witness of the tragical romanze of love and crime. Beito puts it in a modern frame, colourful, lasziv, capitalistic. But the roots, the tradition is not lost. Neither mother love or young toreros absolution for their first fight. As always Calixto Beito goes into details in presenting the story, violence and orgiastic sex give space for phantasy.

Veronica Simeoni is a Carmen with fire and will, winning the love of Don Jose. Her dance to pay the debt including putting of her slip would most probably persuade every man to forget his dutiesas. Stefano Secco is an insecure, clumsy Don Jose. He lacks dramtic power in voice and play, falling into despair and doubts. So Alexander Venegradov as Escamillo can easily conquer Carmen with his impressive external appearence and strong self consciouness. Ekaterina Bakanova is a hardminded Michaela. She knows how to compete with this oblusive Carmen by voice and action and triumphates by gesture. She gives a splendid demonstration of her sublime and lyric soprano. Beito brings the conflict alive with a detailed direction on all movements on stage. Whereas Diego Matheuz lacks energy in the orchestra pit. His conducting is emotionless without romantic colour. He remains exactly bound to the notes and does not melt with the excitement on stage.