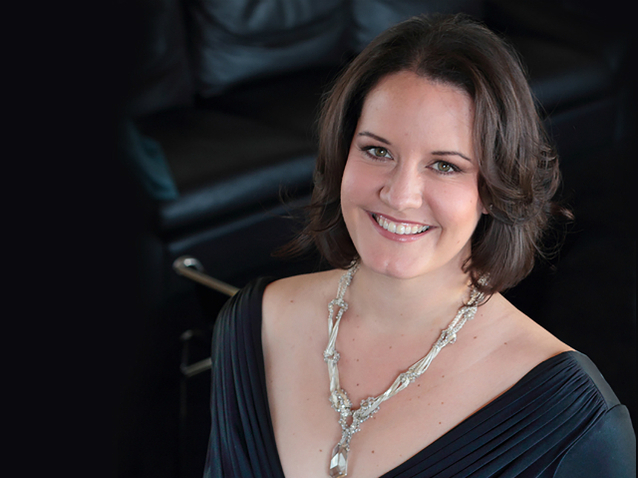 After her oustanding performances in loco of roles like Elettra (Idomeneo), Leonora (Trovatore), Alcina (title-role) or Anna Bolena (title-role), the south-african soprano Elza van den Heever comes back to the Grand-Théâtre de Bordeaux, this time for Norma as a role debut. Opera-Online met this magnificent dramatic soprano, one of the most accomplished of our time.

Opera-Online : When did you realise you had a voice ?

Elza van den Heever : I never know how to answer this question, because what I have to say might sound strange ! I did not personally know - in my heart - I had a voice until I sang Elettra, here in Bordeaux, in 2008. After the first performance of the role here, and after feeling the confidence rush through my veins…that was the first time I realized that I had a voice that might actually sustain a career...Before that, I did not really believe in myself. However, I was told from the age of sixteen on that I was due to have a career as a singer, and I sort of followed the dreams of my mother in particular and my voice teacher all the way to San Francisco when I was eighteen to study voice.

When you began your career, did you have an idea of the roles suited for you ?

No idea what so ever ! I did not know what my voice was, or what it was capable of… I had to rely greatly on the advice of my manager and my teacher to guide me. The problem was that I started out singing as a mezzo soprano, and in 2005 I switched to soprano. Everyone was confused by my instrument ; nobody really knew what to do with me, so we started where every singer should start : Mozart ! From there the roles sort of unfolded as they should have - a lot of Mozart, followed by Verdi, Wagner and then belcanto.

How is it to find the balance between the roles you are offered, those you want to sing and those you feel ready for ?

The word « balance » is the key ! For this I was the luckiest girl alive ! Because I had a manager who was interested in the longevity of my voice, he carefully mapped out a course for my first years out in the professional world. He dictated what I should sing and where. It was all very carefully considered - how to cope with not too many role debuts in one season, and where to sing role debuts ! It seemed in the beginning that for every new role I sang, I would always come back to Donna Anna in Mozart’s Don Giovanni. I would sing my first Il Trovatore, and next I would sing Donna Anna. Then, I would sing my first Lohengrin and next Donna Anna... This is how we managed to keep my voice fresh. I personally have never been in a hurry to sing the big roles too soon. The longer we waited, the better !

Does it happen to you to be moved while singing ? How do you control this ?

This in particular is one of the hardest things to learn on stage ; this is partly why the more dramatic repertoire should be saved for when you are older - older and more mature to be able to understand how emotion can influence your voice ! The answer is « control » ! When you have achieved conscience control on stage, then you can play every emotion in the book without it grabbing your voice… But this takes experience ! And experience only comes form having spend a lot of time on stage, in a lot of different roles and situations.

You have sung roles as different as Armida, Alcina, Donna Anna, Vitellia, Elettra, Desdemona, Leonora, Elsa, Ellen Orford etc. Did you have any doubts with them ?...

Of course, when you are a young singer, learning roles and roles and more roles for the first time, there is certainly doubt ! But this is where you have to be able to trust your teacher and your manager ! Out of all these roles you have mentioned, the one role that gave me the most doubt was Donna Anna ! She was my first soprano role, and I will never forget how scared I was to sing her for the first time. Until you have gotten through the performance or your first « Or sai chi l'onore », you can not comprehend wether or not you will be able to do it. Trust in your voice is very difficult to obtain... This only comes with time !

In your young carreer, are there any roles you just don't want to sing anymore ?...

Definitely, Donna Elvira in Don Giovanni ! Her last aria « Mi tradi quell’alma ingrata » is just horrible ! This aria scares me more than the whole role of Norma ! I have tried it, I have listened to it, and somehow I always feel like it is out of tune. It's just too difficult for me and i NEVER want to sing in my life, ever ! (laughter)

Becanto was a huge part of your early carreer. What were your affinities with this music ? And why you have never sung in Rossini's operas ?...

I don’t believe I will ever sing Rossini... Well, perhaps I will sing his Petite Messe Solenelle, but, my voice does not move quite as fast as it would need to. Getting used to singing belcanto was overwhelming. There is a certain freedom of expression that you need to find for yourself to be able to sing comfortably, taking time with confidence in the cadenze... Wow ! This took some real effort to understand. But now I really love singing belcanto !

Do you listen to recordings before learning a new role ?

I think it's very important to listen to recordings ! I listen to recordings all the time to get a sense of the orchestration, of the style of the music and of the language. When I prepare a role, I always listen to as many recordings of the piece as possible, but then, after a while, I stop so that I don’t start to imitate what they are doing. But it really helps to give me a feel for what the piece sounds like.

After Elsa, another wagnerian role, like Senta or Elisabeth ?

I can not wait to sing Elizabeth ! I don’t understand why I don’t get hired for this role...I have the feeling I should sing it all the time ! With Senta, I feel like I’d like to wait some more. It is very dramatic !

Except music, do you have other hobbies ? Cooking i hear ?

The more time I spend in the kitchen and in front of my Webber, the happier I am ! Cooking for me is like a religion, a true expression of my creativity and it relaxes me like nothing else ! I also really enjoy walking and photography !

Do you still dream of singing Mimi in Puccini's La Bohème ?

Only every single day of my life ! On performance days, I usually listen to the act one finale of La Bohème, over and over again ! The music is so glorious and so pregnant with emotion and pure joy ! I would give my eye and teeth to sing Mimi ! (laughter)

Can you tell us what are the most important qualities a soprano has to possess for being a good Mimi ?

Well, I suppose first and foremost, a beautiful voice with an even range from top to bottom, glorious high notes and a free and open sound, capable of sounding full and round, and also very venerable ! And of course, you’d have to be beautiful !

Tell us about your Ellen Orford in ENO's Peter Grimes production. Why did you like so much singing in this David Alden's production ?

I love the « Alden esthetic ». Both of these brothers poses an ability to « paint » a picture with their use of lights and shadows, and I found in particular a very haunting tableaux in David Alden’s Peter Grimes. The combination with the incredible and intoxicating music of Britten, along with the most incredible cast of singers, and of course Ellen’s character and music, it was for me the « perfect storm » !  It all worked together and there was a special magic in the air that I can’t quite explain to you. It is quite simply one of the most beautiful productions I ever saw !

Could you tell us about The Power of One, Bryce Courtenay's book ?

It was the first book I ever read in English - prior to those i read in my native Afrikaans -, and the first time I came to appreciate the power of the English langue and its ability to express emotion. It is the story about an « underdog » and the story of how one boy realizes the power within himself. The book had a profound effect of me as a teenager ! I have always - my whole life - felt like the « underdog ». I identified myself in the story.

A last and simple question : are you a happy singer ?

I’m the happiest and most grateful singer alive ! (laughter) 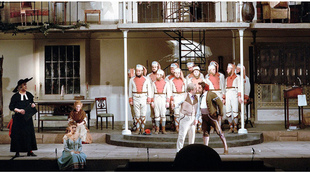