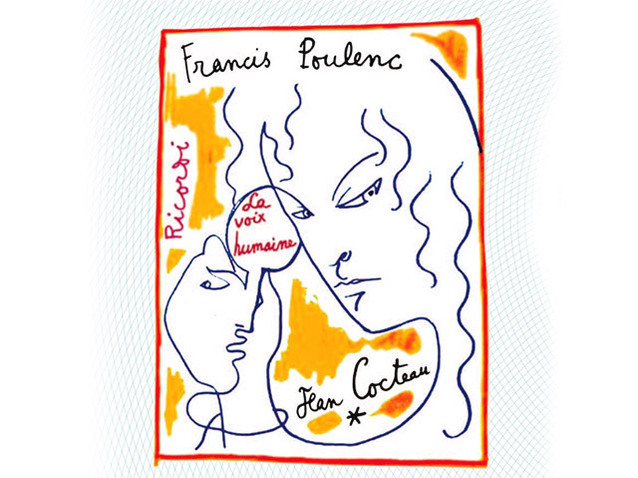 La Voix humaine, an unusual work subtitled “Lyric Tragedy”, was created ten years after Dialogues of the Carmelites. Francis Poulenc composed this operatic monologue for Denise Duval, his favourite singer, who created the role under the direction of Georges Prêtre, with staging and scenery by Jean Cocteau, who also wrote the libretto.  Putting to music his friend Cocteau’s monodrama, in which the telephone becomes the main character in a sentimental drama, was an extraordinary tour de force for the composer.  How could interest be maintained during this long monologue by a woman left by her lover whom she tries to win back in a phone conversation interrupted by technical glitches? Only Arnold Schönberg had attempted a similar experience in 1924 with his monodrama Erwartung, another monologue by a woman looking for her lover. What new musical solutions could be brought to this unprecedented dissection of the lover’s complaint addressed to an invisible interlocutor, to this passion stripped bare through song? Of the 780 bars in the score, 186 are written for voice alone. Poulenc wanted to give song the same freedom as spoken discourse, favouring a transparent orchestration that leaves the voice uncovered. The melodic curve matches all the emotions tearing apart the heroine: love, hate, brutal despair, regret. Tonal ambiguity expresses the imbalance born out of this “pain etched into the work’s fibres”, according to Denise Duval, the role’s creator. The orchestra amplifies the dramatic intensity assigned to singing and ensures an emotional unity with the use of recurrent motifs. It thus plays the role of the absent lover by suggesting the tenor of his responses that punctuate the heroine’s tormented recitative. The composer indicates that “the work should bathe in the greatest orchestral sensuality”.  Clearly its success is based on the diction and emotional commitment of the singer, who “must have suffered from waiting in vain in order to play this work of experienced distress” (Denise Duval).

Summary
An elegant young woman in her cluttered bedroom answers a phone call from her lover, who is about to leave her. In this final conversation, she attempts to win him back by going from tenderness to passion, from threats of her own suicide to calm, from regrets to fits of violence.

This monologue takes up one act lasting about 45 minutes.