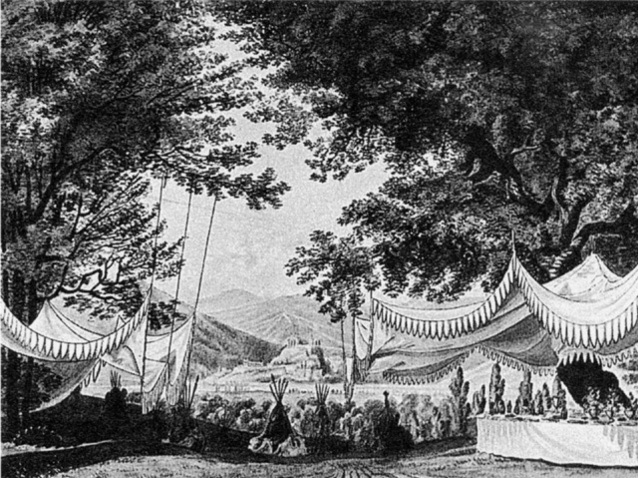 Would he sell his soul to win a shooting contest? That is the tempting question for Max, the young hero of Der Freischütz, who ends up giving in to win the hand of the woman he loves…Presented in this manner, the story may seem a bit comical, but in Carl Maria von Weber's hands, the popular fable becomes a diabolically powerful masterpiece. In the foreground we have a rustic setting, tests of skill, folklore and hunts. Lurking in the background are the troubling forces of nature, governed by unearthly powers. Trapped between these two worlds, the heroes of Der Freischütz are torn between good and evil, dreams and reality, love and death. Weber translates their fears and passions with a broad palette of effects and a great deal of imagination: rousing choruses, graceful solos, frightening scenes where voices echo the sound of a macabre orchestra (the terrible Wolf's Glen). The daring score, which was admired by Wagner, remains one of the most brilliant examples of German Romanticism. It also marks the birth of German opera.

The story takes place in a forest in 17th-century Bohemia. The young hunter Max, who was once an excellent marksman, seems to have lost his abilities. However, if he does not win a shooting competition organised the following day, he will not be able to marry his true love, Agathe. Through the sinister Kaspar, Max concludes a pact with Zamiel, the dark ranger, who will help him cast a set of magic bullets. However, he does not know that the last bullet is destined for Agathe. This is the doing of Kaspar, who takes part in casting the magic bullets in the macabre Wolf's Glen. At the shooting competition the following day, Max uses the bullets, including the seventh one, which, thanks to the intervention of an old hermit, misses Agathe at the last minute. The evil bullet hits Kaspar instead, whose soul is immediately appropriated by Zamiel. To punish Max for making a pact with the Devil, the assembly condemns him to a probationary period, at the end of which he can marry Agathe.

Max, a young huntsman, is in love with Agathe, the head gamekeeper Kuno’s daughter. Once an excellent marksman, Max seems to have lost his touch. If he does not win the shooting competition the following day, he cannot hope to marry Agathe and become head gamekeeper. Max is lost in melancholy thoughts

Kaspar, one of Kuno’s men, has sold his soul to the dark ranger, Zamiel, and persuades Max to use some magic bullets to win the shooting contest. Max hesitates and then decides to accompany Kaspar that night to the Wolf’s Glen, where the bullets are to be cast. Kaspar is delighted. Max will take his place: in exchange for the magic bullets, he must forfeit his soul to the Devil.

Agathe is worried and does not want Max to go to the Wolf’s Glen. Meanwhile in the glen, Kaspar prepares the ritual for casting the seven magic bullets and asks the dark ranger, Zamiel, to make the seventh and final bullet hit Agathe when Max shoots. Max meets up with Kaspar. Spirits appear, followed by birds, black boor, hurricanes and sinister cracks of a whip and galloping sounds: each bullet that is cast is announced by Kaspar, whose voice echoes throughout the forest. As the clock strikes, Zamiel holds out his hand to Max. Kaspar passes out. The bullet ceremony is over.

In her room, Agathe is putting on her bridal gown.She prays and tries to forget a nightmare in which she saw a white dove shot down by Max.

A chorus of hunters celebrates the upcoming shooting contest.During the contest, Max will use his magic bullets, but thanks to the intervention of a hermit, the fatal bullet hits Kaspar instead Agathe.Because he made a pact with the Devil, Max must wait a year before marrying her.