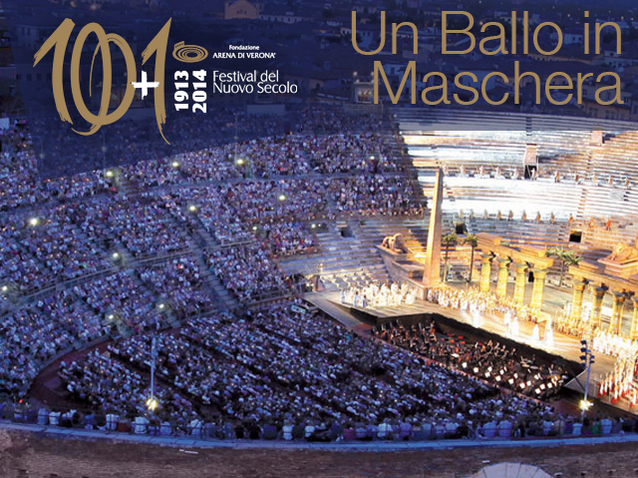 In 1856 Verdi came to an arrangement with the San Carlo Theatre in Naples for the composition of a new opera to be staged in January 1858. At first the choice of the subject had been on the Shakespearian King Lear with a libretto by Antonio Somma, but this project soon began to fade away. Actually Verdi had requested the presence of Maria Piccolomini for the role of Cordelia, but the singer was not available. Then the composer put King Lear to one side and chose a new subject inspired by a libretto which Scribe had written for an opera by Auber (Gustave III ou Le Bal masqué). This opera had premièred in 1833 and at that time it was still performed in numerous theatres. It was not the first adaptation of the above mentioned opera: the libretto had been translated and modified by Salvatore Cammarano for Il Reggente by Mercadante (Turin 1843).

The subject of the libretto written by Scribe dealt with the murder of the Swedish King, Gustavus III, in 1792 during a masked ball. Verdi asked Somma to translate the libretto in 5 acts by Scribe and to adapt it to be made into a three-act opera. Somma was a renowned man of letters, but all in all a quite inexperienced librettist and therefore Verdi played an active and instrumental role in writing up the text. Verdi and Somma took this decision in October 1857, when there were only three months to go before the scheduled première. Anyway Somma worked very quickly and towards the end of the month the first act was already completed. Three weeks later the second act was ready too.

Lack of time was not, however, the only problem. Verdi had to submit the libretto to the Neapolitan board of censors for its approval. He had already been warned by the executive secretary of the San Carlo Theatre that the board of censors might make some changes as the opera dealt with a regicide and that's exactly what happened. Some of the conditions the censors laid down for the staging of the opera included the changing of the main character from king to duke and the shifting of the time and place. Verdi conveyed to Somma the changes to be made to the libretto and the latter proposed to move the story back to the twelfth century and to set it in Stettino in Pomerania, but although the composer agreed with Somma about the place, he found that the age the librettist had chosen was too rough and violent and it didn't actually suit the the elegance of the characters and the subtlety of the story. Then the choice fell on the seventeenth century and a new title: La vendetta in domino.

In spite of all these attempts to soften the potentially dangerous elements, in January 1858 Verdi reached Naples and was in for a bitter surprise: on arrival the censors had refused the permission to stage the opera with or without the changes of time and place. The attempt on Napoleon III's life at the hands of Felice Orsini, which occurred on January 13th the same year, had deeply troubled the Neapolitan monarchy which at that time was more than ever prejudiced against any references to the regicide, even if it was only on the stage. Moreover the censors insisted that the libretto be completely written again. In order to meet these unalterable requests the San Carlo Theatre consulted another librettist, who created a new opera, Adelia degli Adimari, set in Florence during the fourteenth century. The theatre offered Verdi this new composition, but it was met with his refusal: as a result the theatre brought an action against the composer. The latter promptly replied through his lawyers and he succeeded in having his contract with the Neapolitan theatre annulled, but at the same time he committed himself to staging a new opera the following autumn.

Un Ballo in maschera - Act II - Teatro Filarmonico 2002Meanwhile Verdi had already offered La vendetta in domino to the Apollo Theatre in Rome and they had accepted it with the proviso that it had to be submitted to the papal censors. The latter gave their consent on condition that the story was not set in Europe. After taking numerous countries into consideration, Caucasus included, Verdi and Somma decided on the United States at the end of the sixteenth century and they changed King Gustavus III into Riccardo, Count of Warwick and Governor of Boston. Moreover they decided to change the title of the opera by using the original subtitle by Scribe, i.e. Le Bal masqué, which became Un Ballo in maschera.

When the last changes suggested by the censors were made, at last it was possible to stage the opera. From its première, which took place on February 17th 1859, Un Ballo in maschera was a great success. It was also on that occasion that the acrostic "Viva Verdi" was invented: it was a hymn to Vittorio Emanuele, King of Italy, interpreted as a challenge to the Austrians and it spread rapidly throughout Italy. Apart from its role in the patriotic atmosphere of that time, Un Ballo in maschera stands out for its emotional strength and Verdi's genius that found here a new and lively expression. The opera met with success immediately and the Roman critics defined it as a a step forward in Verdi's new style.