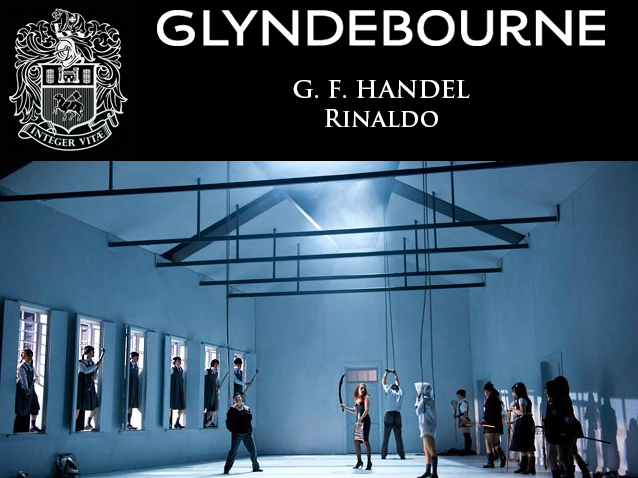 A revival of the 2011 Festival production

In 1711, the 26-year-old Handel was commissioned to write an Italian opera for the Queen’s Theatre in the Haymarket. Rinaldo, the ﬁrst Italian-language opera written especially for the London stage, is arguably as English as it is Italian. Designed to fuse the virtuosity of Italian singing with the extravagance of the 17th-century English masque, Rinaldo displays the inﬂ uence of British semi-operas like Purcell’s King Arthur and plays including Dryden’s Amphitryon.

‘Glyndebourne’s reputation as a Handel house receives a boost with Robert Carsen’s new production of Rinaldo,’ wrote The Sunday Telegraph of this show’s premiere in 2011. Handel’s tale of love, war and redemption during the First Crusade, loosely based on Torquato Tasso’s popular 16th-century epic poem Gerusalemme liberata, here becomes a madcap fantasy set in a British boarding school, a backdrop that deftly underlines the piece’s inherent Englishness.

Canadian soprano Karina Gauvin, debuting as Armida, and Canadian baritone Joshua Hopkins, the Count in Le nozze di Figaro in Festival 2013, returning as Argante, complete a cast of accomplished Baroque virtuosi. Ottavio Dantone returns to conduct the Orchestra of the Age of Enlightenment ‘in a thrillingly zingy reading of the score,’ according to The Times (2011).