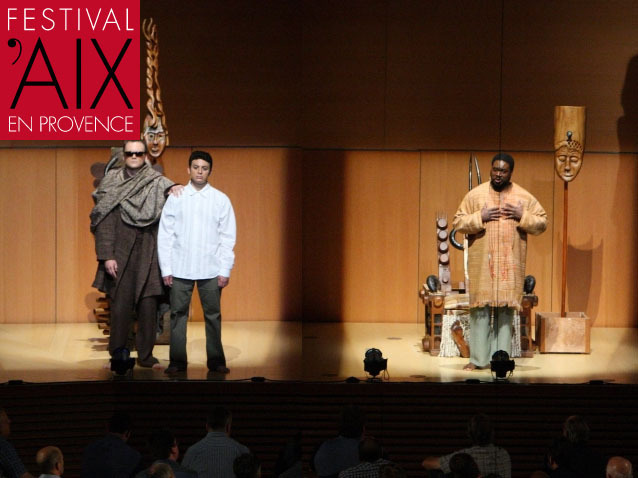 REVISED PRODUCTION FOR THE FESTIVAL D’AIX-EN-PROVENCE
IN CO-PRODUCTION WITH THE PHILHARMONIA ORCHESTRA, BASED ON A PRODUCTION BY THE LOS ANGELES PHILHARMONIC

Plague has descended on Thebes. Oedipus, the king, wants to find out who is responsible. In an uncompromising search for the truth, he gradually comes to realise that he is the guilty one; guilty of killing King Laius, his father, and marrying Queen Jocasta, his mother. Stravinsky’s Oedipus Rex is a reworking of Sophocles’ uncompromising play, told in archaic Latin and set to music of hieratic splendour. And to give us the next instalment – the subject matter of Oedipus at Colonus, also by Sophocles – director Peter Sellars came up with the idea of complementing Stravinsky’s dramatic oratorio with a lavish piece for choir and orchestra: the Symphony of Psalms. This takes us on a journey from the depths of the abyss to the bright light of passionate alleluias, a journey comparable to that made by the ageing Oedipus, now blind and in exile, and guided by his daughter Antigone to the place where he will die. Salonen and Sellars, passionate Stravinskians both, take us on the trail of the King of Thebes in the company of an acting Antigone, some stunning soloists, three Scandinavian choirs and the spellbinding Philharmonia Orchestra.