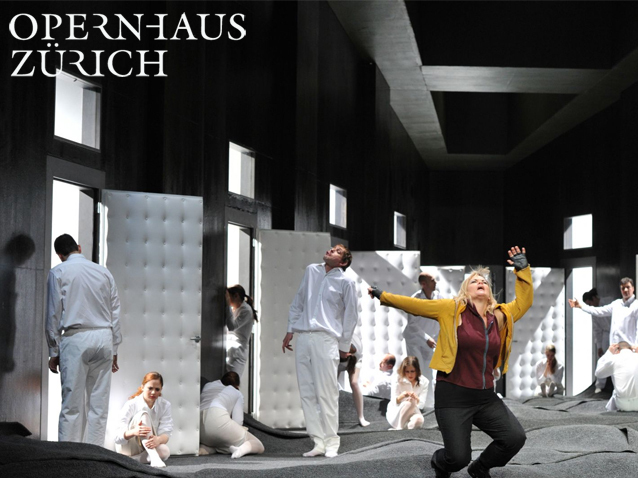 Scarcely had audiences overcome the shock of Salome than Richard Strauss presented his Elektra at the beginning of the 20th century; in its radical harmonies and emotional power it even exceeded Salome. With an enormous orchestra, the composer unleashed sounds that had never been heard before and whose wild expressionism has lost none of its impact to this day. The archaic subject matter is as terrifying as it is fascinating: a young woman – Electra – remains alive solely for the idea of avenging her father’s murder. When vengeance has been exacted and her brother Orestes has killed their mother Clytemnestra and her lover Aegisthus, Electra dances an ecstatic dance, at the climax of which she collapses and dies.
In this revival of Martin Kušej’s much-lauded production, Evelyn Herlitzius, recently celebrated in Aix-en-Provence as the “ideal Electra”, will sing the title role. Hanna Schwarz can be heard as Clytemnestra, and Emily Magee returns to Zurich Opera as Chrysothemis. The young German conductor Lothar Koenigs will be performing at Zurich Opera House for the first time.