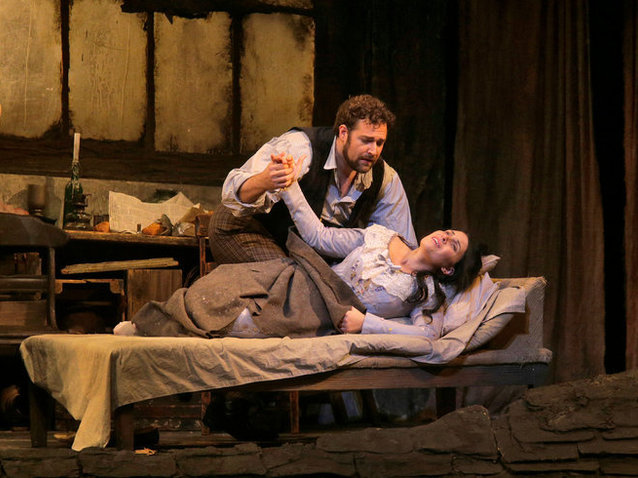 You could sense fear in the audience when Peter Gelb, General Manager of the Metropolitan Opera showed up on the stage with a microphone when everyone was expecting Ricardo Frizza to appear in the pit. Gelb had bad news and good news, as he said. Ramon Vargas had cancelled last minute but fortunately, the Met was able to fly in Bryan Hymel from Chicago earlier the same day. Gelb also announced that Sonya Yoncheva, the lead soprano, had a new born five weeks ago (general “awwww” from the audience) and was singing Mimi for the first time tonight. In other words, it sounded like Gelb was apologizing in advance for what could have been a disappointing performance. The whole house sighed and sat more comfortably for an expected average-low Bohème, until Sonya Yoncheva pushed open the wooden door of Rodolfo’s Parisian room.

From that moment, I think we all understood we were in for something special. It is true that Yoncheva’s debut at the Met last year as Gilda was not memorable. One could argue that the stage direction did not help: she never seemed comfortable with last year Rigoletto’s production. But this time, seeing her appear on stage coughing, unsteady, seeming so movingly fragile, it was clear that Peter Gelb was either playing with his audience or had not attended the general rehearsal. Even before her main aria, Sonya Yoncheva was giving in everything. It worked: Mimi had never seemed so real. Then came “Mi chiamano Mimi”, perfectly executed, with subtle nuances, moving restraint and daring legatos that would come like emotional waves repeatedly crushing the audience. Yoncheva’s voice was everywhere in the theater, reaching and bouncing back the walls of the immense Met Opera house. It was one of these rare moments in opera when we get to see a thing of such beauty that we are allowed to forget everything: the craving of every opera fan around the world. Through the whole performance, Yoncheva depicted with great intelligence the complexity and sensitivity of Mimi’s character, delivering a very moving performance.

Sonya Yoncheva carried the night on her shoulder and it was clear that her energy communicated with the rest of the cast who seemed at times surprised by the intensity of her performance. Bryan Hymel (fortunately enough, the tenor had sung in the first run of this production back in September) did great and formed a very convincing duo with Yoncheva, despite the last minute trip and a cold we could guess from shaky low notes in the first act. David Bizic, also a fairly new face at the Met, is a dark but solid Marcello. His style nicely contrasted with Hymel’s bright and light Rodolfo. Generally speaking, the quartet formed by the male roles worked out beautifully: the comical scenes at the first and last act were hilarious and made the sudden tragic shift to the ending even more devastating. Alessio Arduini in Schaunard was particularly comfortable for his debut and got a lot of laughs from the audience. His singing, as excellent as his acting, did not shadow Matthew Rose, whose “Vecchia zimarra senti”, deep and exact, was heartily applauded. Myrtó Papatanasiu’s “Quando me’n vo’” lacked elegance and could have sounded more vertical but the rest of her Musetta was quite satisfying. Her contribution to the “group effect” of this particular cast was also important.

Franco Zeffirelli’s production has been the most famous Bohème in the world for the past three decades. It is also the most popular production of the Metropolitan Opera: the audience still cheers at the sets of the second and third acts. It has been criticized for its opulence and classicism but there is one undeniable quality to it that needs to be recognized: this production is “singer-friendly”. The stage direction has been perfected for decades and is in perfect agreement with the librettos; the large sets cradle the voices so they do not get lost in the immensity of the Met Opera stage. As a result, singers tend to excel in it. And really, how can one get tired of this second act, with its larger than life Parisian streets, hundreds of extra among the choir, horses, donkey – yes, opulence, remember?
This second act itself, symbol of a long gone era, the Grand Opera era – and is that good or bad? I am leaving that one up to you – is worth the trip to the Met.

This Bohème ends like any exceptional Bohème. Spectators for the most part in tears, a standing ovation, a dazed audience quietly and pensively leaving the opera house. They will have to come back.