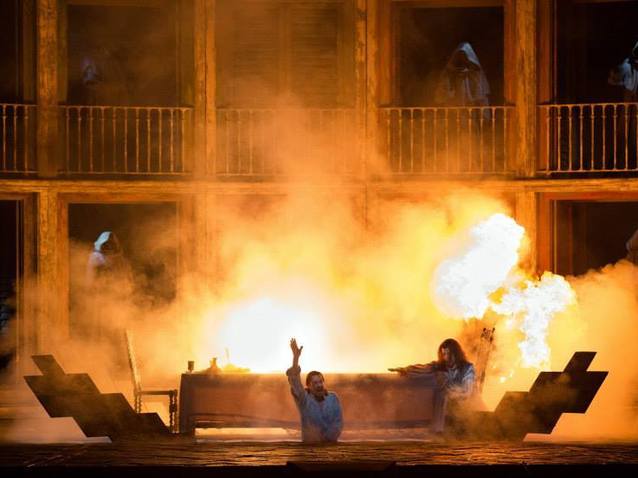 It is always a bit sad when the curtain goes up in front of an half empty opera house. There is of course the awfully cold February New York weather, no to mention the particularly unpopular Michael Grandage’s production – a large number of critics have described it as not daring enough and boring – that premiered here at the Met in 2011. One could think the cast should be helping: Petter Mattei as Don Giovanni, Luca Pisaroni as Leporello and beloved New Yorker Alan Gilbert in the pit sure make it sound like it could be a high quality performance. Still, this run of Don Giovanni is not drawing crowds to the Metropolitan Opera.

I actually do not have that many problems with Grandage’s production and I even find it great at times. Sets and costumes are from the story’s time period. A sliding wall front stage can be divided in three parts, creating alleys in between each part so singers can come and go. Those parts are covered with large doors on the first floor and windows on the second and third floor, all with shutters. Behind this first wall is another concave wall with the same doors and windows. When the first wall rolls away, the action moves from the street to, Masetto and Zerlina’s wedding party, to Don Giovanni’s palace, to the cemetery. I must admit that even I find the previous description pretty boring, but this system is used with great intelligence and the different scenes unroll very seamlessly, notably at the end of the first act when the action moves between the street and Don Giovanni’s palace – always a struggle for stage directors.

The entire production really benefits from the energy of Peter Mattei, arguably the greatest Don Giovanni on the circuit nowadays. He was hilarious that night, grand, fearless and impetuous. Mattei went through the piece with really impressive confidence and great intelligence, showing an impitoyable but at the same time weirdly touching Don Giovanni. His voice was as strong as expected, charming and perfectly nuanced. He formed a perfect duo with Luca Pisaroni who also gave in everything that night. Pisaroni had no problems navigating his “Madamina” when all the shutters at the second and third floor of the different walls composing the sets opened one after another to progressively show many women posing, representing of course all the names in Don Giovanni’s catalogue. Definitely one of the highlights of the night.

Things got more complicated when those two were offstage, and quite crazy when Dmitry Korchak would be on. The tenor is doing his Met debut as Don Ottavio this year and I am not quite sure what happened that night but something was surely wrong. His “Dalla Sua Pace” was a complete disaster: absolutely all his sustained notes fell flat while he could not stop scooping them. The same bizarre thing happened in “Il Mio Tesoro”. No one booed at the end – the Met audience does not boo, except for very very bad opening nights – but you could sense embarrassment and laughter amongst the audience during these two arias. Let’s hope Mr. Korchak feels better for the rest of the run. Emma Bell’s Dona Elvira was disappointing in the first act, in which she let her acting gets in the way of her singing: her “Ah, Chi Mi Dice Mai” was too agressive and sounded edgy. Things got rounder for her in the second act. Elza van den Heever went through her role smoothly, with timid acting but strong and moving singing. Kate Lindsey is an irresistible Zerlina and compensates for Adam Plachetka voluntary but sometimes exaggerated clumsiness. Both sang beautifully. Finally, James Morris is not the loudest and darkest Commendatore one can hope for but has enough authority to make his entrance frightening enough.

Alan Gilbert gave a precise and solid lecture of the score and was completely in sync with Mattei and Pisaroni’s great energy. These three really saved the night.