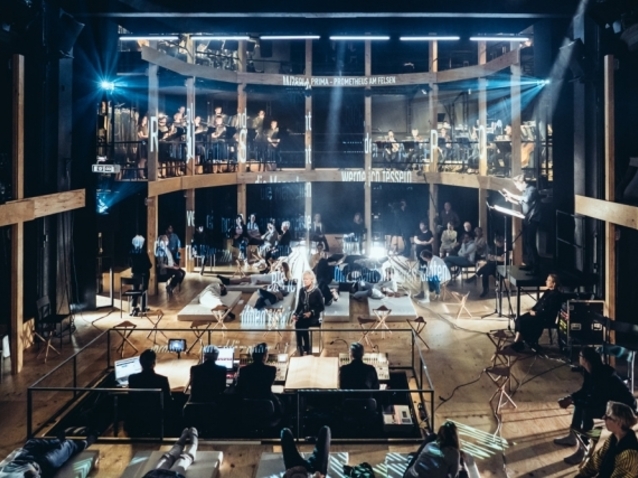 Luigi Nono is one of the most prominent composers of the 20th century. He was born in Venice into a wealthy family and studied music and law in Padua. For further education he moved to Germany, where he became friend with Hans Werner Henze, Karl Heinz Stockhausen and Pierre Boulez, all of them musical leaders of the Avant-garde. Notable for his strong political left wing orientation, his musical heritage and influence are enormous. He experimented with new sound possibilities and involved technical developments and instruments at the Experimentalstudio of SWF in Freiburg.
Prometeo is the master piece of his late period. Luigi Nono has returned to the traditional opera, a drama with music, whereas this work misses any visual drama or story to be staged. It is written for vocal and instrumental solists, choir, instrumental groups and electronic instruments. The libretto incorporates various fragments of various novelists lacking of any content and logical sense. Subtitled as a tragedy of hearing music and sound dominate in their projection into the space. For the world premier in 1984 in Venice, the star architect Renzo Piano has designed a boat into San Lorenzo church for optimisation of the hearing experience, thus being a model for the current production of the Stadttheater Luzern.

This is the smallest ever used location for the presentation of this demanding piece of music. In Luzern, 80 musicians play for 250 listeners in 11 repetitions, which never happened so far. Benedikt von Peter newly arrived director of the Luzern Theater has built a new structure into his old theater, which is waiting for years now for renovation. Based on the structure of the Globe theater of Shakespeare, the musicians take place on the two balconies surrounding the ground level where the audience 'takes place'. Sitting, lying, standing, walking or drinking during the performance is allowed, and even promoted. Special instructions are distributed at the entrance and everybody has to take of his shoes and jump into good old swiss cottage stockings, a special feeling with room temperature well above 30 degree. But it works, once settled and adapted to the unfamiliar structure and situation, the audience is banned by the spheric music, light design and direction in the room and the abnormal ambience in toto.
Text fragments in relation to the mythical story of Prometeo are projected on the walls and the ceiling, slowly flowing like and endless. So does the music, setting the listener in a status of absolute slowness, provocative volume and density of changes. Clemens Heil, chief conductor of the evening, and Matilda Hofmann guide the musicians with concentration and very explicit gestures through the partiture. They are closely set to the audience, starting to make them feel as musicians themselves. As modern the music is at the same time, it is full of romantic color, soft and harmonic. The sound color of the different instruments is strongly contributing to the atmosphere created. The vocal soloists, to a large extend from the local ensemble, are challenged. Super high notes, fast runs or extreme jumps, individual steps-in, demand high concentration and perfection of the voice technique. As pointed out by Benedikt von Peter, the overall performance and ambition of the evening is outstanding, with an outstanding result for the ensemble and the orchestra, as of the theater of Luzern. Long preparation and immense efforts have well paid-off and the brilliant performance has well justified the investment. The performance at the theater of Luzern is part of this year's Luzern Summer Festival, which again offers a dense program of high quality symphonic evenings and solo recitals. Daniel Barenboim is one the visitors to the festival with his Staatskapelle Berlin the following evening. He once more gives a glorious presentation of his piano playing with Mozart's Coronation Concert KV 537, followed by Bruckner's 6th Symphony. Bruckners romantic natural description is boundled with perfection, detailed description and moving dancelike intervals, demonstrating the orchestra's great strings and horns.