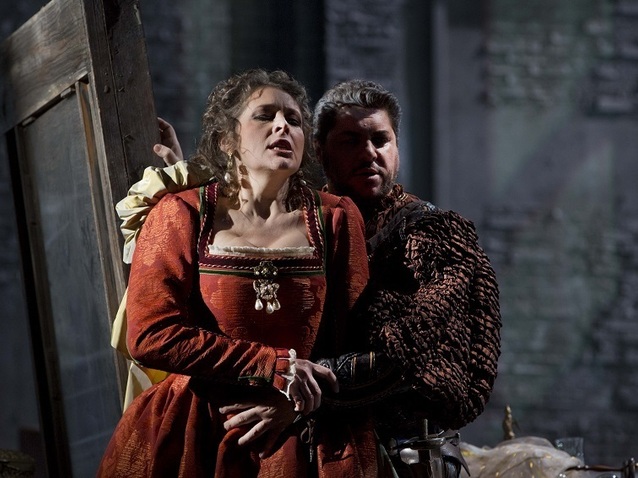 The Italian Senat discussing the destiny of Sivio Berlusconi, the people demonstrating on the street and the political high society is elegantly gathering in the Teatro di Roma for the opening of the new season of this historical opera house. It was originally built by the rich Impresario Domenico Constanzi, inaugurated on November 27 1880. In 1926 it was donated to Mussolini and refurbished by him till 1928.

After the Italian President Napoletano has taken a seat in the Palco Reale Maestro Riccardo Muti paces dignified to his desk. The performance starts with the national anthem and everybody is standing respectfully. The direction of this new production of Verdi´s early opera of revenge and love is the Argentinian Hugo de Ana. There is not too much to say about this very traditional, static direction. The stage is mainly grey, a medieval setting, the costumes are Renaissance style and colourful. So it is the music and the singing. Riccardo Muti knows how to bring Verdi s music alive. He conducts wonderfully with spirit, attention, emotion and love. The 3 male protagonists are excellently selected and their voices differentiated. Francesco Meli as Ernani, Luca Salsi as Don Carlo and Ildar Abdrazakov as de Sivla are fighting for the love of Elvira. Tatiana Serjan is not convincing as Elvira, her voice remains shimmerless. Most important is the choir who plays an important part in this drama and is perfectly prepared by Roberto Gabbiani. The audience is thrilled and rewarded with a bis in the third act. Lots of applause for this excellent performance. Just in time the syndicats and politicians could avoid a strike before the performance and Muti comes back to the audience at the end,asking for their support of this cultural institution which is heartily affirmed.