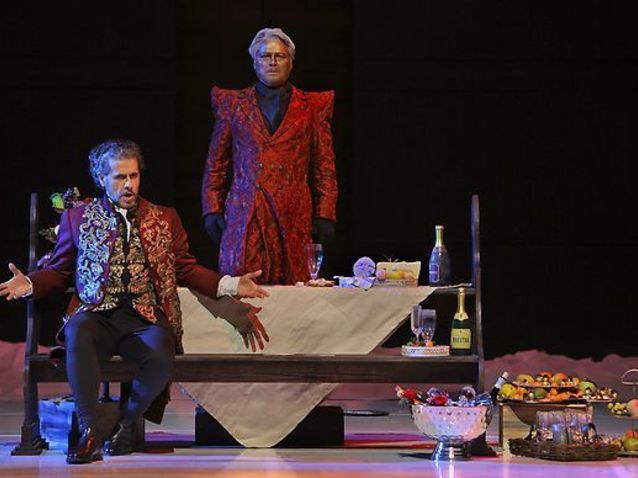 The Tyrolean winter festival has found a new home last year with the opening ceremony of its new festival house, an architectual and acoustic jewel in the idyllic village of Erl, close to the German border. The Tyrolean Summer festival taking place in the world famous Passionsspielhaus of Erl has established its reputation for outstanding Wagner performances in simple and traditional stage design. The winter festival is presenting a broad programme of chorus and orchestral concerts from Sebastian Bach to Anton Webern and operas by Wolfgang Amadeuas Mozart and Giacomo Puccini.

Salzburg born Gustav Kuhn and his team introduce Don Giovanni, Wolfgang Amadeus Mozarts dramma giocoso to the audience in their typical minimalistic and estetic style.They design this cruel, women condemning playboy as a sophisticated, elegent gentlemen. The stage remains rather empty. Some bands in dark brown colour are hanging down, somehow continuing the inner design of the festival hall. A big white ball in a square construction is overruling the center of the stage, its meaning is kept secret. Light gets important and dims the scenery in bright daylight, mystical evening or night. The story lacks action, malice and sexappeal and the terror of Don Giovanni appears like boyish escapades. Only his ends develops into a dramatic spectacles with fire when he is swollowed by open earth to death.

Gustav Kuhn starts his musical interpretation with a solemn broad overture, volumes are not too differentiated and the singers have to strike hard with the orchestra. But the Maestro Kuhn is very sensible and reacts by bringing in more colour and variety into the instrumental sound and helping the young singers to give them room. Anna Princeva is a dramatic Donna Anna and can climb safe and sivery up high. Sabina von Walther heads off well as Donna Elvira but loses power. Impressive the performance of Sophie Gordeladze as Zerlina with her bright fresh and clear soprano. Lucio Gallo is an experienced safe tenor in the role of Don Giovanni but remains colourless. Yashushi Hirano has a deep and dark bassvoice but fails to open and evolve his full timbre of his voice as Leporello. Ferdinand von Bothmer gives a young and clumsy image to Don Ottavio.

Erl and Gustav Kuhn has built up its loyal audience attracted by the high quality of young singers, and musiciens as well as original and disciplined interpretations. They have been served well this evening and the applause was accordingly. The evil was defeated, the brute was punished and everybody returned content and reliefed home.