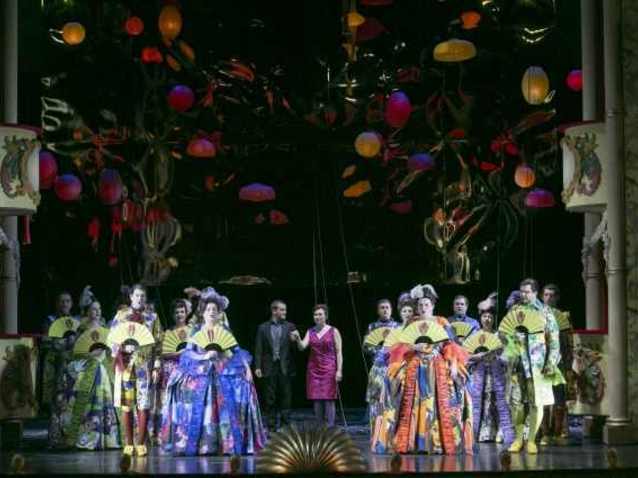 Mozart's famous Singspiel, a new gender at his time of composing, returns to the charming and historic Cuvillés' Theater, a perfect setting on his own with its originals baroque stalls of the 18th century. Munich's second opera house, the Gärtnerplatztheater is currently under renovation, so the ensemble uses different locations in the city. This new production of Mozart's Entführung aus dem Serail is fresh colourful and fast moving. It is the first opera direction of young successful Stephanie Mohr. She designs strong expressive descriptions of the different characters on stage. The work is extended with poems by  Michel Houllebecq, giving Bassa Selim a broad presence. It is an integration of drama by the play of actor Raphale von Bargen. This Bassa Selim is a random dictator, powerful and influental.  It is frightening, when he plays with his revolver or outbursts in anger. The salvation has no sign of humanity, it is a sign of power and political revenge - but in this interpretation, it is thrilling. The stage design is oppulent and colourful with historic costums. Jennifer O`Loughlin presents a self confident Konstanze and has a beautiful lyric soprano, fine and clear, safe in the high parts. Csilla Csövari gets sharp in her modulation. Patrick Simper has drama and volume in teh role of Osmin, whereas Daniel Prohaska puts much effort in his play to balance the weaknesses of his voice. Dean Power shows that he has a fine tenor for Mozart's operas, but needs to refine and strenghten it.

Venetian Marco Comin, conducts the orchestra with a lot of power. The Overture gets sharp, accents of military marshes, but he finds back over the evening to a smooth and warm sound, supporting the singers, and easening the tenseness on stage. The reception by the audience was very positive for this well entertaining evening.