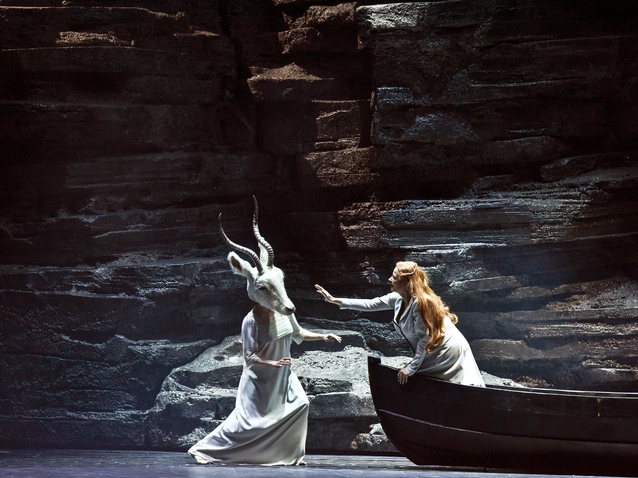 Claus Guth created this production of Strauss/Hofmannsthal’s The Woman without Shadow (Die Frau ohne Schatten) 2013 for La Scala. After later shown at Covent Garden, London it is now being staged at the Berlin State Opera as part of the Easter Festival 2017, scenic rehearsal by Julia Burbach.

Contrary to other concepts with directors elevating the over-mystified, ferry-tale like plot into full abstraction (Loy for Salzburg or Ponnelle for Cologne many years ago), Guth and Christian Schmidt (as so often with Guth responsible for stage design and costumes) take on the complete “real” content and personage. On top of this, they even add certain elements to the staging which usually do not appear.

There is first of all the empress’s father Keikobad, but also the gazelle, one of the outer appearances of the Empress during her own character’s evolution. Both figures accompany the Empress through her dreams and nightmares at a Viennese mental hospital at about the date of origin of the opera, like with C.G. Jung and Freud looming over the stage.

In the empress’s nightmare two orbits collide: the men’s with Keikobad, the Emporer, and Barak and the women’s personified in the Empress herself, the dyer’s wife and the nurse. Right from the beginning the Empress feels deeply with the dyer’s wife and will never be able to deal for her shadow. She would not be able to bear the guilt of taking away another woman’s fulfillment for her own. Both women are often lead on stage like in a parallel choreography of common understanding and emotion.

The nurse characterizes the Empress’s inner energy and doubts offering the inevitable antagonism in herself to initiate her own painful evolutionary process.

Barak’s simple and deep rooted receptiveness and love will not be the Empress’s world at last – she understands that she will stay trapped between her father Keikobad’s frozen law to obey to petrified traditions and transfixed attitude of the Emperor’s hunting (i e possession) instincts, all illustrated with their yet unborn children costumed as sweet little gazelles and a kitschy little chorus with just the Christmas Tree missing – almost implying a baby production unit between the wars – truly a nightmare to escape. Consequently, the Empress at last awakens back alone in her clinic’s bed with the nurse on her side without giving up the longing for another concept of life.

A perfect reflection of the early 20th century’s doubts and fears about how life to live or not to live - and actually very comprehensible and clear for today’s observer, too.

But is not only this overwhelmingly intelligent and empathic concept of the production that convinces and which is rounded up by sublime lighting created by Olaf Winter and video art by Andi A. Müller – it’s the singers and the musical realization of the enormous score.

With three female opera stars at the peak of their career, seemingly effortless command of their roles, and the ability to sing German perfectly, Camilla Nylund as Empress, Irene Theorin as the dyer’ wife and Michaela Schuster as nurse can’t be surpassed today.

There are no mundane words to adequately describe the ladies’ vocal performance and visual achievement in this production. We might shyly highlight all their ability to play and perform their specific roles with an utmost inner assertiveness in voice and attitude. Exciting (to mention just one element) the mephistophelic but at the same time repeatedly funny and weird appearance of Michaela Schuster’s nurse.

Wolfgang Koch convinced as the deeply rooted and loving Barak with soft voice and perfect personification as Keikobad’s counterpart. Burkhard Fritz convinced in all aspects of the difficult role of the Emperor.

Of the numerous members of the total cast only a few can be mentioned here: The stunning voice of Roman Trekel as Ghost Messenger, Voice of the Falcon by the wonderful timbre of Narine Yeghiyan and Barak’s brothers performed by Karl-Michael Ebner, Alfredo Daza and Grigory Shkarupa.

The Staatskapelle Berlin played under the baton of Zubin Mehta. The voluminous score was most delicately performed with predominantly fine subordination under the specific mannerism of the score’s “Sprechgesang”, combined with many delicate solo performances of almost all orchestra groups.

Mehta focused on a moderate, light and highly transparent sound structure taking into account the relatively small volume of the Staatsoper’s current substitute location, the Schiller Theater. Only at the culmination and crisis of the plot when all protagonists seem inevitably on their path to entanglement and guilt at the end of Act II and the nurse’s relegation in Act III, the orchestra masses are allowed to enjoy their power to the full – with grand effect though, too.

The Chorus was reliably guided by Martin Wright.

The audience followed with continual attention over more than four hours and applauded all soloists heavily, with many “Bravi”, and a tumultuous acclaim for Camilla Nylund. Rightly so, the orchestra was asked to join the stage by Mr. Mehta receiving a standing ovation by the enthusiastic house.

The Woman Without a Shadow - Berlin O... 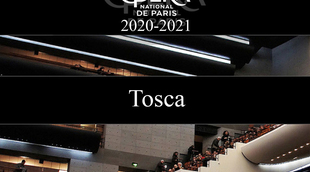