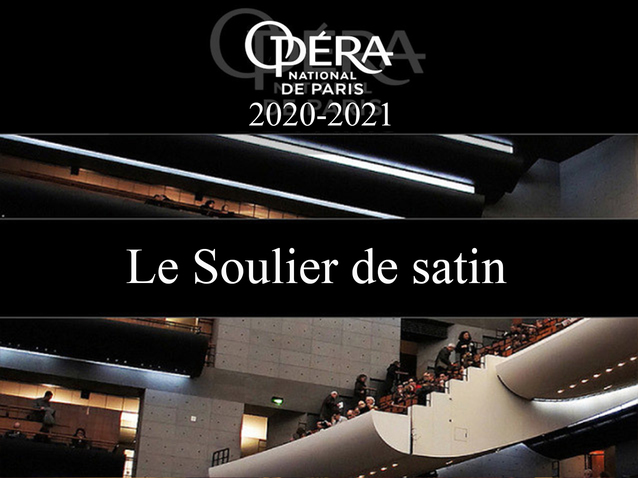 World premiere from the work of Paul Claudel.

"The subject for the Satin Slipper comes from a Chinese legend about two celestial stars in love who, each year, having travelled far, manage to come within reach of each other without ever being able to come together from the disparate sides of the Milky Way.” So surmised Paul Claudel. The play, whose power of attraction has never wavered, occupies a special place in the theatrical repertoire of the 20th century: written between 1919 and 1924 and first staged by Jean-Louis Barrault in an abridged version in 1943, it would have to await Antoine Vitez to be performed in its entirety. That production, performed in the courtyard of the Palais des Papes in 1987, lasted over ten hours and marked an entire generation of theatregoers, including Marc-André Dalbavie.
Alternatively titled The Worst Is Not Always Certain, The Satin Slipper is an immense parable which alternates between the sublime, the comic and the disturbing. It is set in a specific era—the Spanish Golden Age—during which humanity experiences its first bout of “globalization”. Confronting a passionate desire for individual happiness, external imperatives and an aspiration for the universal, the work leads the spectator into a ongoing state hovering between hypnosis and joy. This new opera is the third world-premiere production commissioned by the Paris Opera for its cycle on French literature.